The new Stockholm office of energy drink company Red Bull incorporates a range of flexible communal spaces, including a reception with a modular desk that can be reconfigured for use as a bar in the evening (+ slideshow).

The interior of the office in the centre of the Swedish capital features details influenced by Red Bull's branding and its focus on adventure, culture, sports and art.

It was designed by local studio PS Arkitektur, which also completed an office with geometric carpet tiles and colourful furniture for communications company Skype.

"Red Bull wanted their product to show in the interior design but in a sophisticated, modern and cool way," architect Julia Falås told Dezeen.

The architects used a palette of blue, black and gold that references the colours found on the company's drink cans, while its logo depicting two charging bulls in front of a yellow sun provided further visual cues.

Leather chairs intended to evoke the bulls combine with round furniture items that recall the circular element of the logo. Rhombus shapes also used on the cans are translated into areas of the patterned carpets.

A key requirement for the interior was to provide flexibility so visiting artists and other guests can be easily accommodated. Furniture that can be moved around and reconfigured is used throughout the offices and the reception area to facilitate different uses of these spaces. 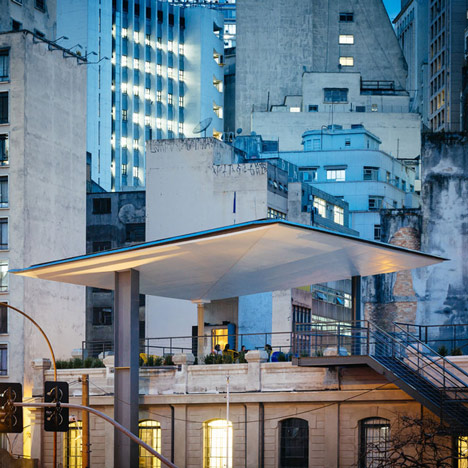 "The client asked for a professional workplace with ergonomic work stations, a mix of open landscape work places and some private rooms," explained Falås. "At the same time, they wanted areas where social and spontaneous interaction between colleagues and guests could take place. The office is a mix of these functional requirements."

A custom-made reception desk features hinged and folding sections that enable it to expand or contract depending on the needs of its users.

"Red Bull liked the idea of transformation from a more strict reception desk to a casual bar," Falås added. "It manifests the two parts of the office and company; playful and spontaneous yet very professional."

Circular swings suspended from the ceiling and Thomas Heatherwick's pivoting Spun chairs for Magis provide playful seating in the communal lounge area, while staff also have access to a kitchen, table football and table tennis.

Marble worktops in the kitchen introduce a natural element to the material palette, which contrasts with the industrial look of metal-mesh ceiling panels and the exposed black cords of pendant lights suspended throughout the space.

Black kitchen units decorated with a pattern of diagonal lines continue the rhombus motif that is also applied to partitions around the office space.

In addition to the main offices, a variety of smaller rooms for meetings and phone calls are also incorporated into the design. Breakout spaces encourage informal meetings and provide visiting consultants with temporary places to work.

Quotes from a range of inspirational characters including Red Bull's brand ambassadors are applied to the glass walls of the meeting rooms.

Red Bull's other global offices include one in Amsterdam with cave-like spaces contained behind faceted metal walls. The company also operates an arts space in a converted warehouse in the Brazilian city of São Paulo and turned another warehouse in Madrid into a music academy filled with plants and makeshift huts.

Photography is by Jason Strong.