The minimal interior of this house in Japan's Hyogo prefecture features a basic palette of white walls and wood surfaces aimed at providing a calm and comfortable environment for its elderly residents.

The interior of the 28-square-metre house for a couple whose children no longer live at home was redesigned by Osaka-based Tsubasa Iwahashi Architects, which has previous completed an office featuring hanging plants and a shed-like meeting room and a three-storey house squeezed onto a four-metre-wide plot in the architect's home city.

Following decades of accommodating a family, the key objective of the refurbishment was to facilitate a simpler way of life for the parents.

"The clients wanted a comfortable space that is suitable to live alone," Iwahashi told Dezeen. "The main intervention was to remove surplus."

Existing partitions that gave the building's interior a cramped feel were removed and the layout altered to create brighter and more open spaces. Pillars that formed part of the original framework were retained to offer a reminder of the house's past. 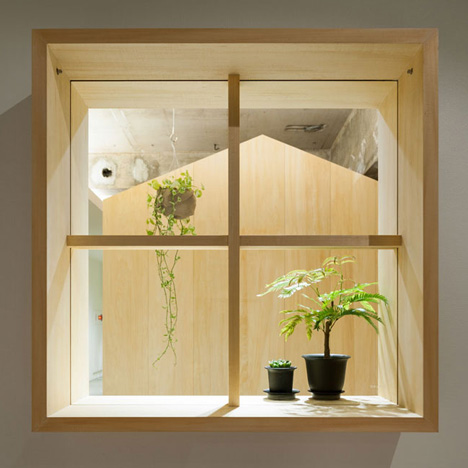 The house's entrance leads into a small hall providing access to a bedroom and a staircase leading to the upper storey.

An open-plan room accommodating living, dining and kitchen amenities occupies most of the ground floor. Sliding wooden partitions can be used to close off some of the spaces, including a bathroom area behind the kitchen.

A suspended ceiling incorporating lights and an extractor in the kitchen is punctured by an opening that reveals the original rafters, which the architect suggested provides "a symbol of the memory of what has been supporting the house for a long time."

Fitted cabinetry provides the majority of storage throughout the house, while additional custom-made furniture in matching plywood ensures a minimal material palette that enhances the simplicity of the spaces.

A timber column and beam added in the bedroom reference a traditional Japanese tokonoma, an alcove-like space typically used to display valued artworks.

Brass used for details including door handles and the frame of the dining table complements the warm feel of the birch, Douglas fir and oak used throughout the interior.