Contemporary design and fabrication processes were used to produce a staircase with "wing-shaped" folded steel treads at the heart of this renovated New York City apartment (+ slideshow).

Local studio Incorporated remodelled the interior of the apartment in a pre-war building on Central Park West in Manhattan for a couple with a large art collection.

Having recently extended into the upper unit of a duplex spread across the building's 14th and 15th floors, the owners wanted a cohesive interior where they could display their large collection of paintings, photography and sculpture.

The apartment building was constructed in 1921 and its classically arranged internal layouts had become outdated, so Incorporated set about creating brighter spaces that retain many of the building's original features.

"We sought to deconstruct the symmetries and contained rooms of the original plan to facilitate a more open loft-like experience, without losing the memory of the original detail and the structure of the architectural envelope and plan," the studio's design director Adam Rolston told Dezeen.

Existing details including the herringbone floors and a hand-carved fireplace were retained and provided references for new interventions aimed at giving the entire apartment a unified feel.

The most striking addition is a staircase at the centre of the apartment's plan that connects the two levels. Its cantilevered treads resemble those of a staircase added to designer Deirdre Dyson's London gallery, while the streamlined structure recalls a minimal steel and glass stair at a gallery in a converted Alpine house. 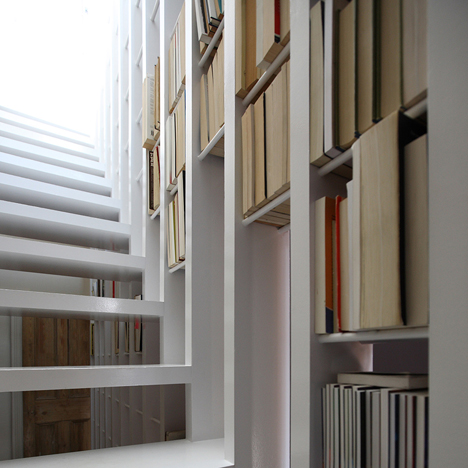 Incorporated's aim when developing the staircase was to create a visually lightweight form that could only be produced using the latest design and manufacturing processes.

"The mandate for the stair was to float between the floors," said Rolston. "We wanted to create a stair that would be experienced as a sculptural element, and to push the engineering of the design to its logical limits to facilitate the minimum intervention."

Influenced by the Japanese paper-folding art of origami, the stairs are made from steel with a folded "wing-like" form that provides inherent structural strength and reduces the amount of material required.

Digital design software was used to model a shape that tapers as it extends further from the wall and the deflection forces placed on it diminish.

The form was tested by producing 3D-printed versions and structural analysis software was used to check the strength of the steel and glass elements before the final digital model was sent to the fabricator.

The cantilevered treads are connected to a single stringer embedded and hidden in the existing structure, while a glass screen lining the staircase accentuates its lightweight feel.

A system of brackets, clips and channels – designed to secure the screen, railings and treads – is concealed behind the flooring and the plaster finish of the walls.

Photography is by Annie Schlechter.