An old house perched at the foot of the Swiss Alps has been converted into a gallery to exhibit the work of a local artist.

Architect Matteo Inches was approached by the 80-year-old daughter of late Swiss artist and archaeologist Aldo Crivelli to create the gallery, named MeCri Museum. It hosts exhibitions of her father's drawings and paintings, as well as temporary displays of sculptures and paintings by other artists. 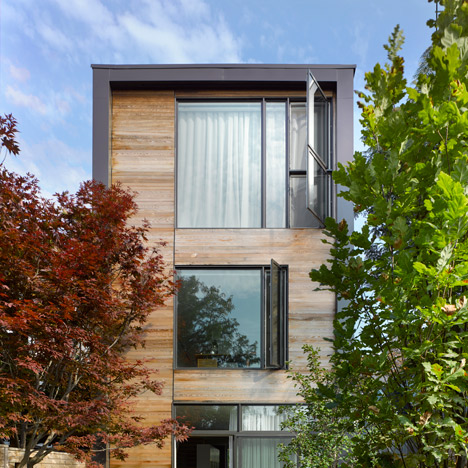 Inches converted a four-storey 19th-century building in Minusio – an Alpine town situated on the shores of Lake Maggiore near the Swiss-Italian border – to house the museum and gallery.

"The MeCri Museum began with the dream of a 80-year-old woman to realise a museum in memory of her father Aldo Crivelli, who was a famous archaeologist and also a painter and writer of the southern Swiss region of Ticino," explained Inches.

Local planning regulations dictated the exterior form of the building remain unchanged, down to the number of openings and height of the pitched roof, but the architects were allowed free reign over the interior.

In contrast to the traditional exterior, the interior space has been gutted to make way for a series of double- and single-height gallery spaces, linked by a white metal staircase.

Tall glass panels enclose the stairs that run up one side of the building, allowing natural light to illuminate the stairwell.

"The interior of the building was totally emptied and completely rebuilt apart from the vaulted room on the ground floor, which is a reminder of the building's original function: a home," said the architect.

The spaces are finished with neutral-coloured floors and white walls that create a blank canvas on which to hang drawings and paintings.

Small oblong windows and glazed doorways provide views over the town, lake and across to the mountains. The glazing is set flush with the inner surfaces to emphasise the thickness of the old stone walls.

"The interior was kept white to create a canvas for the colours of the artwork presented and also to let the scenery outside become another focus of the visit," said the architect.

"The exposition spaces are a sequence of continuous spaces, two in double height, which create new spatial experiences and relationships between each floor," explained the architects.

The upper floor is topped by an exposed timber roof structure, which has been painted white in keeping with the gallery walls.

An extension for the museum is planned for 2015-16. It will include the construction of a small pavilion against a stone boundary wall and the creation of a courtyard between the two structures.

Photography is by Marcelo Villada Ortiz.