Cavaa Arquitectes has stripped back the interior of an apartment in Barcelona's Poblenou neighbourhood, creating an open-plan living space featuring traditional vaulted ceilings.

Prior to the renovation, the communal areas of the small property were dark and segregated, with little exposure to natural light.

Hoping to create a brighter space, Cavaa Arquitectes decided to centre their intervention around a courtyard located towards the back of the house.

"The yard was a residual, dark and forgotten space," said the architects. "We wanted to transform it into the new centre of the house."

The team replaced an existing brick wall with floor-to-ceiling windows framed in natural pine, allowing daylight from the courtyard to flood the house. 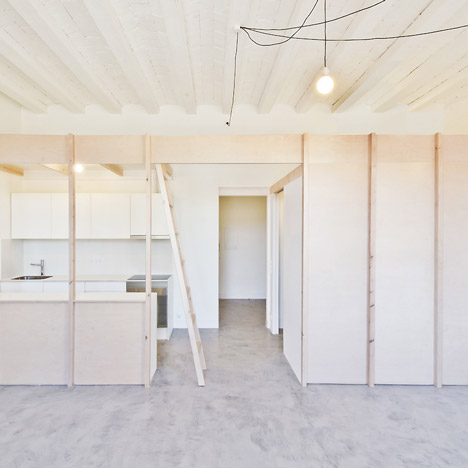 "From our earliest sketches, the patio was invited to come inside the house to give value to the kitchen and living space," the architects said.

Catalan vaults – a traditional Spanish ceiling style where plain bricks are laid in rows across gently curved forms to create a series of smooth low ceiling arches – were previously hidden underneath a plasterboard ceiling, but have now been exposed.

This type of ceiling is typical of properties in Barcelona, and Spanish studio Laboratory for Architecture also chose to uncover the arch-shaped feature in a city-centre apartment.

Wooden shelving units and boxes were also installed, creating new storage areas that match the material of the window frames. The aim was to create a cohesive aesthetic throughout.

"We used pine because in our country it is one of the most economic materials," Cavaa architects told Dezeen."We like the contrast between this urban flat and the pine wood."

Dark-coloured floor tiles define the kitchen area, whilst wooden floors cover the rest of the space.

Kitchen cabinets and drawers are fronted with white cupboard doors, and a mismatched set of chairs sit around an old wooden table.

Other properties in Barcelona that have recently been renovated include an apartment within an early 1900s Art Nouveau building, and a residence that uses sliding wooden partitions to create different rooms.