The set is an expansion on Sempé's original IS01 risotto serving spoon, designed in 2012 to commemorate the anniversary of historic Italian recipe book Cucchiaio d'Argento (Silver Spoon).

The risotto spoon featured a circular bowl, attached to a pinched-in base and softly tapered handle.

The full set of Collo-alto cutlery – which Alessi director Alberto Alessi described as "Mitteleuropean in style" – echoes the features of Sempé's original design. 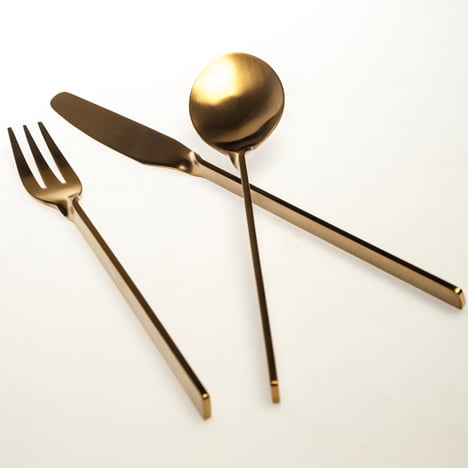 All of the pieces on the collection feature a long, narrow neck that links the heads of each implement to gradually tapered oblong stems.

The spoons in the set all have rounded rather than oval bowls, and the collection's salad server has comb-like prongs set into the head.

"The refined design of the piece of cutlery is perfected by a light border between the handle and the end piece, a slight change of volume that is particularly complex to implement during the production process," Alessi said in a statement.

The service features all the standard eating implements – fork, knife and spoon – as well as options for an ice cream spoon, a serving spoon, salad tongs, a ladle and a cake slice. The cutlery is sold as single pieces, or in sets of five, 24 or 75.

The Collo-alto collection made its debut at the Maison&Objet design fair, which ran from 4 to 8 September 2015 at the Nord Villepinte exhibition centre outside Paris.

Other designers that have played with archetypal cutlery forms to create more unusual products include Nicole Wermers' double-ended teaspoons for the Tate Britain cafe, Lee Ben David's eating utensils created for specific foods, and Nendo's Sekki collection designed to look as if it's been carved from flint.

Sempé's other recent designs include a modular pinboard for Hay and mix-and-match tiles for Italian ceramics brand Mutina.