Formafantasma founders Simone Farresin and Andrea Trimarchi, who are better known for their experiments with materials like lava and animal skins, were asked by the brand to design the set just months before the show. They join the likes of AMO, Studio Job and Pernilla Ohrstedt, who have all previously designed catwalks for fashion shows.

"Sportmax has always been interested in architecture and design and this is visible even in the clothes," said Trimarchi. "Now they are in a moment where they feel to engage even more with design."

Trails of PVC plastic in yellow, black and nude colours were used to cover three sections of the narrow catwalk. 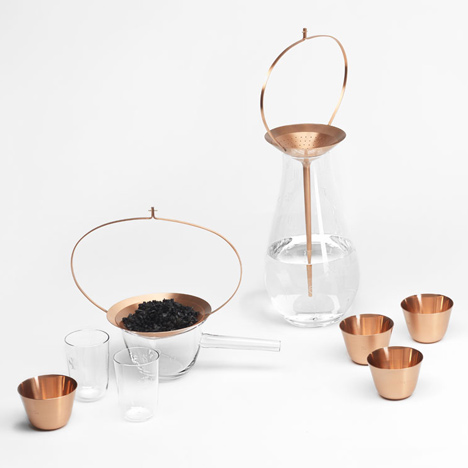 From the ends of these walkways, the material was stretched around the space and then looped back to the start of the low platforms.

Zigzagging from the ceiling, the translucent film was hooked over high thin rods and held down on the floor by terracotta cylinders.

"The decision to use these two materials is because we wanted to have a Mediterranean feel, with the use of terracotta but contrasted with a more contemporary, synthetic material," said Trimarchi.

The catwalk, kept purposefully low to remove any hierarchy between models and spectators, snaked around the space between rows of wooden benches.

At the entrance, a screen formed by a lattice of terracotta tiles displayed the brand's name in neon.

"We wanted the space to feel not as a scenography but more as a deconstructed architecture," said Trimarchi. "We wanted to still keep their product at the centre."

The duo approached the project as a "material study for impermanent spaces", with the aim to be frugal with materials.

"We feel very responsible not only to create an impactful presentation for the client but also to guarantee to limit the amount of resources we use in such a presentation which is a temporary show," Trimarchi told Dezeen.

The colourful lengths of plastic were based on scenes of dancers in Cubo-Futurist paintings by Aleksandra Ekster, while the hues were taken from Sportmax's garments.

"When we started working we could see some inspiration images and the palette of colours," said Trimarchi. "We knew the initial inspiration was 1960s fashion."

Another influence was the venue – a grand early 20th-century building designed by Luigi Broggi, which originally housed Milan's stock exchange and is now the headquarters of the post office.

The duo aimed to contrast with the largely grey and stainless steel interiors of the refitted palazzo with bright colours and tactile materials, referencing Italian summer houses built in the 1960s and 1970s.

Farresin and Trimarchi both studied at Design Academy Eindhoven and set up their studio in the city after graduating in 2009, before relocating to Amsterdam last year.

The duo's recent projects include a designer cake, a range of unusual timepieces and a collection of engraved drinking glasses.

Milan Fashion Week took place from 23 to 29 September 2015. Also for the Spring Summer 2016 fashion season, Hussein Chalayan installed catwalk showers that dissolved garments during his show in Paris, while Roksanda's presentation in London took place amongst an MDF landscape.