Squares of light shine through the perforated brick facade of this former storehouse, which architect Ryo Matsui has converted into an entertaining space after it was partially destroyed in Japan's 2011 earthquake.

The 120-year-old storehouse was badly damaged in the Great East Japan Earthquake – which killed almost 16,000 people and damaged over a million buildings when it hit in 2011 – but the client was still keen to preserve the building for future generations.

Ryo Matsui and his Tokyo firm rebuilt the structure and renamed it Rebirth House. It now provides a generous living and dining space beside the client's home in Ibaraki prefecture. 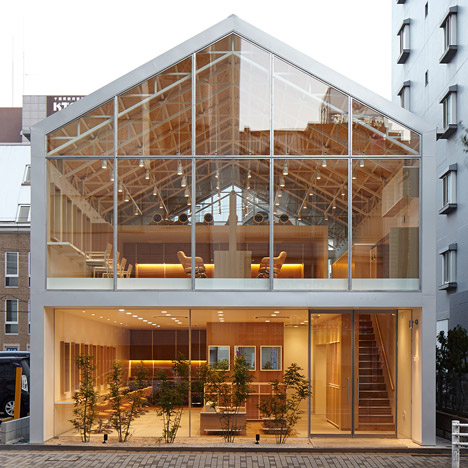 While the original ornamental roof tiles were preserved, the outer walls had to be replaced. A new perforated brick facade covered in a layer of white render was added to the structure, which the architect describes as being like a lace veil.

"After investigating, we judged it was difficult to reuse of main structure. However, we decided to reconstruct as parts of the house keeping their atmosphere," explained Matsui, whose previous designs include a hair salon with a transparent house-shaped facade.

The original windows were made slightly larger to bring more light inside without changing the overall appearance of the building. At night these openings appear as a series of illuminated squares, created by the artificial lighting within the building.

"We thought the existence of new windows could be concealed like wearing lace," said the architect. "And we devised a facade laid of perforated bricks and painted white plastery."

"Though it seems to retain the old storehouse appearance from the outside, when we enter the inside we are wrapped with gentle light and wind from many windows," he added. "The concealed windows of the facade are visible only at night."

A wooden mezzanine matching the pale timber rafters overlooks the primary entertainment space, which is illuminated by pendant lights and long white flexes and features a circular dining table. 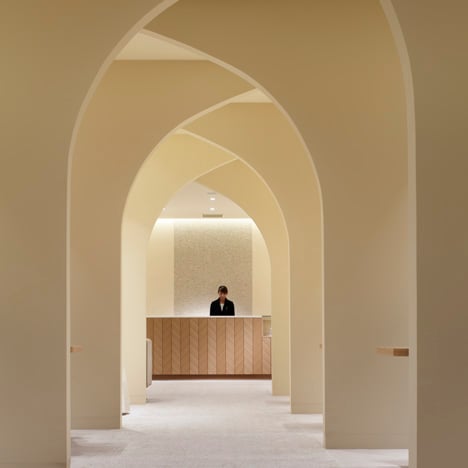 Projected across the inner daub walls is a gridded pattern of light and shadow created by perforated screens across the windows.

In the basement, a brick-lined wine cellar offers a more intimate dining space around a chunky wooden tabletop. This is supported by a stack of perforated red bricks left over from the construction of the outer walls.

"Inheriting from the old memory and the new behaviour, we hope it becomes the house that be loved from generation to generation," said the architect.

The firm has also designed the interior of a comic book store and a wedding planner's office.

Photography is by Masato Kawano/Nacasa & Partners.