i29 was invited by Dutch magazine Eigen Huis & Interieur to design the temporary installation for the VT Wonen&Design Beur event, which took place from 29 September to 4 October 2015 at the RAI Amsterdam exhibition space.

The studio decided to create a restful area amidst the busy nature of the fair that visitors should explore "step by step".

"As the pavilion is in the middle of an overcrowded fair with lots of products, we wanted to create a restful place," architect Jeroen Dellensen told Dezeen. "The powerful simplicity of the pavilion makes it a place for contemplation amidst the abundance of products at the fair."

"We strived to make a spatial experience for the visitors that surprises; an environment that should be discovered step by step," he continued. 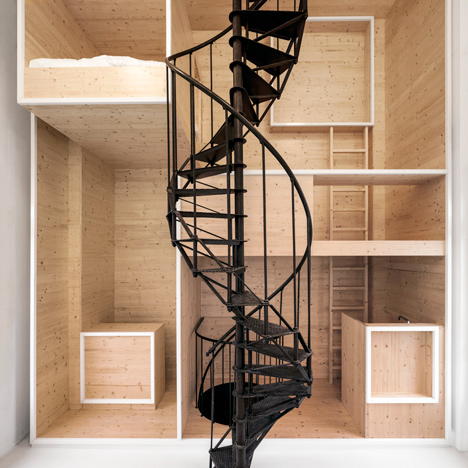 The space is split into two zones: one featuring boldly coloured walls and carpets, and the other completely stark white.

Mirrored volumes are situated in both sections of the pavilion, and "play with the perception of space" by reflecting the colours of the opposite side.

Display cabinets filled with household objects are encased within each of the reflective boxes, and are intended contrast with the "emptiness" of the pavilion.

"The display cases include compressed worlds which refer to living," said Dellensen. "The contrast between the emptiness of the pavilion itself and the richly decorated display cases reinforce each other."

Each of the cabinets have been uniquely decorated, and are intended to make visitors question the relationship between product and environment.

"We want to stimulate awareness with the visitors that a living environment is not only about products they buy, but mostly about the environment they are placed in," said Dellensen.

i29 was founded in 2002 by designers Jaspar Jansen and Jeroen Dellensen, and has since turned a historic department store tower into an artists' residence, and created an optical illusion within a Dutch design shop.

Photography is by Dennis Brandsma and Ewout Huibers.

More projects by i29