Parasitic apartments blocks over fire stations and starter homes floating on waterways are among the 10 winning designs in a New London Architecture competition to find solutions to London's housing shortage (+ slideshow).

The ideas competition by think-tank New London Architecture (NLA) invited entries from the world over to offer solutions to London's housing shortfall. From a shortlist of 100 designs ranging from modular prefabricated housing to rooftop dwellings in the city's exclusive Mayfair district, 10 finalists have been selected.

The first is a floating house concept by Baca Architects, the studio behind the UK's "first amphibious house". 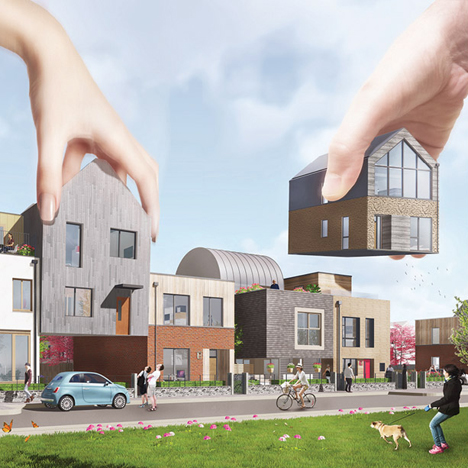 The London studio worked with the company Floating Homes on the proposal named Buoyant Starts – a prefabricated housing model for first time buyers on stretches of disused water across the capital.

The architects estimate this model could provide 7,500 starters homes on the 50 miles of rivers and canals, as well as on the 150 hectares of "bluefield" space in the city's basins, marinas and docks.

Another winning entry, Wood Blocks by London studio dRMM Architects, is a "ready to camp in" shell and core housing typology, allowing self-builders to fit out their own interiors within a thermally and acoustically insulated shell.

The Urban Darning Project by Patrick Massey is an infill housing project aiming to make use of gaps in the existing urban fabric.

The small residential developments would be carried out by architects and planners appointed by each London borough.

The hypothetical scheme would involve public buildings being rebuilt by private sector companies in projects funded by the rental of the apartments above.

"This would comfortably meet the projected 488,000 homes that will be needed in the capital in the next decade whilst simultaneously improving public facilities," said Price, who developed the proposal with planners and engineers WSP|Parsons Brinckerhoff.

Mega Planning, Beyond 2050 – MegaPlan for a MegaCity makes use of Green Belt land within the M25 motorway that surrounds the capital.

Separating the cost of land purchase from house construction by adopting a leasehold system, Investing in London's Future by Learning from its Past by David Kroll aims to to ward off private developers and keep land under public ownership.

Public transport routes to hard-to-reach areas of London are improved in the ATAL Opportunity Areas project by The ATAL Team in an attempt to unlocks areas of the city for development.

Making use of small infill sites across the city, the scheme claims to be able to provide as many as 110,000 affordable homes by 2025.

The winners will be invited to participate in a Greater London Authority working group to explore how their ideas could be developed to deliver future housing for the capital.

Initially, a shortlist of 100 designed was drawn up from the 200 international entries last month. Among those that did not make the final cut was Rogers Stirk Harbour + Partners' modular housing system for homeless charity YMCA on a plot in Mitcham, south London.

The 100 projects on the NLA's list will be on show at The Building Centre in London from 15 October to 17 December 2015.