London may be booming, but it is still too conservative and generic when it comes to architecture, according to Zaha Hadid.

The British architect, who will become the 2016 recipient of the Royal Gold Medal for architecture, has said she finds it "disappointing" that no outstanding cultural buildings have been constructed in the UK capital in recent decades.

Speaking last night at an event held at the Serpentine Sackler Gallery – completed by Hadid's firm in 2013 – she said: "London is really booming, there's a lot of [new] buildings. The disappointing part is that there are no great cultural buildings."

The only exception, she said, is Herzog & de Meuron's renovation of the city's Bankside Power Station, which is now the Tate Modern art gallery.

"But that's an existing building," she added. "In terms of real innovation in the city fabric and the city block, it remains very conservative. There is an emerging generic project that you see everywhere."

Hadid has completed over 50 built projects around the world in her career. But only four of these are permanent structures in London – the London 2012 Aquatics Centre, Evelyn Grace Academy, Roca London Gallery and the Serpentine Sackler Gallery.

The architect's first project in the city was in 2000, when she was invited to create the structure that kicked off the Serpentine Gallery's annual pavilion commission.

Hadid said she initially thought the pavilions might help to provoke more innovative construction in London, but looking back she doesn't think that happened. 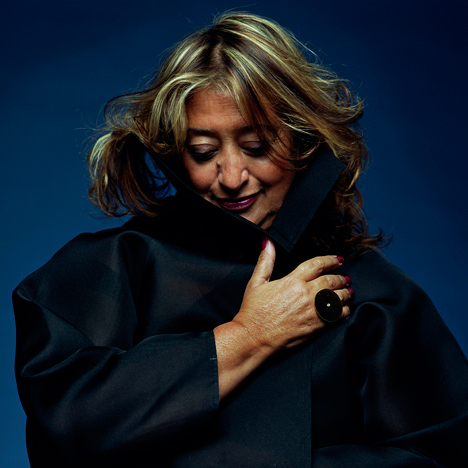 "The interesting thing about the Serpentine is that it was an idea to do a project in London where is hasn't been done anywhere else, as an example of what one can do, to give a clue of what other clients could maybe take on," she said. "But I'm not sure it has in that sense."

"The fact is we live in London, we work in London, but we don't have a single project in London," she added. "And I'm not critical of what is being built just because I don't have any work [here], I just was hoping there would be some sort of change to the idea of urbanism, the idea of building."

The architect suggested the the only place to find imaginative work is in London's architecture schools. "It is the only place where you can actually show some sort of difference to this conservative idea," she said.

The comments were made in conversation with Serpentine Gallery co-director Julia Peyton-Jones. The event was held to celebrate the launch of Hadid's new residential building by the High Line in New York.

Hadid will next year become the first woman to win the Royal Gold Medal in her own right in the 167-year history of the prize.

She hit the headlines shortly after the announcement was made, when she cut off a live radio interview over allegations regarding deaths on her Al Wakrah stadium in Qatar. Design critic Stephen Bayley later described her as aggressive, intractable and bitter.

Portrait of Zaha Hadid is by Brigitte Lacombe.