Each of the postage stamps in this set by Dutch designer Daan Roosegaarde shows a different part of the Netherlands as it would be seen from space at night.

Commissioned by PostNL – a Dutch postal and parcel service provider – the Enlightenment stamps come in a single perforated sheet of ten, and portray the country as a spidery network of light. 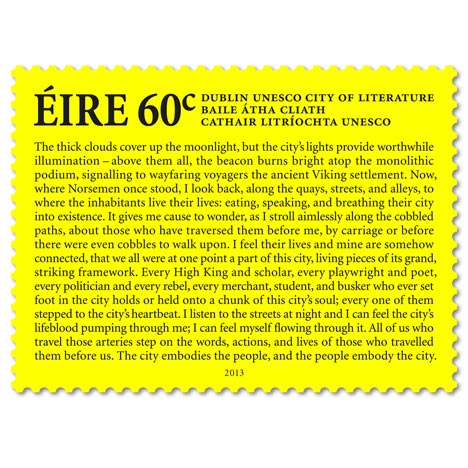 Dublin UNESCO City of Literature stamp by The Stone Twins

"The stamp sheet shows the Netherlands as we have never seen it before," said the designer, who recently installed the "largest smog vacuum cleaner in the world" in Rotterdam.

"You don't really know whether you're looking down at the earth from above, or looking at the starry sky from the ground," he added.

While some stamps feature dense concentrations of light around the main cities, others show single threads or more sparsely populated regions.

"It's an amazing network of light which establishes connections," Roosegaarde said. "It's ominous and poetic at the same time: it gives us an insight into our behaviour and the impact it has on our landscape. In this way, the stamps offer both literal and figurative enlightenment."

Roosegaarde's work with light spans projects from an installation above a flood channel and a glowing cycle path, to a highway illuminated by solar power.

The Netherlands has produced a variety of notable stamp design over the years, including Studio Job's series commemorating Dutch king Willem-Alexander in 2013 that showed a digitally-modelled image of his face.

In London, studio Hat Trick Design created a set of Royal Mail stamps that featured iconic architecture from around the capital, to celebrate the London 2012 Olympics.