A modular residential tower designed by nArchitects that is meant to offer a solution to New York's affordable housing shortage is nearing completion (+ movie).

The building, named My Micro NY, is currently rising on a site in Manhattan's Kips Bay neighbourhood.

The firm has just released a two-minute video, created by filmmaker Antti Seppanen, that shows construction progress. The video is a trailer for a documentary that chronicles the 35,000-square-foot (3,250 square metres) project.

Organised by former New York mayor Michael Bloomberg and sponsored by the city's Department of Housing Preservation and Development, the competition invited designers to propose micro dwellings that could serve as a new model for affordable housing, particularly for one- and two-person households.

Currently the median rental price for a one-bedroom Manhattan apartment is $3,400 (£2,200), according to a Bloomberg report.

The city is experiencing a boom in luxury housing projects, including a series of super-tall residential towers that are now under construction in Manhattan. Architect Steven Holl took issue with the towers in an Opinion piece for Dezeen, stating that "architecture with a sense of social purpose is becoming increasingly rare" in New York.

Rising nine stories, My Micro NY will contain 55 units ranging from 250 to 370 square feet (23 to 35 square metres). Completion is scheduled for December, with an opening to follow shortly after.

Work on the modules began in 2014. Composed of steel frames and concrete slabs, the modules were built in the Brooklyn Navy Yard, an industrial site that is now home to creative agencies and workshops. 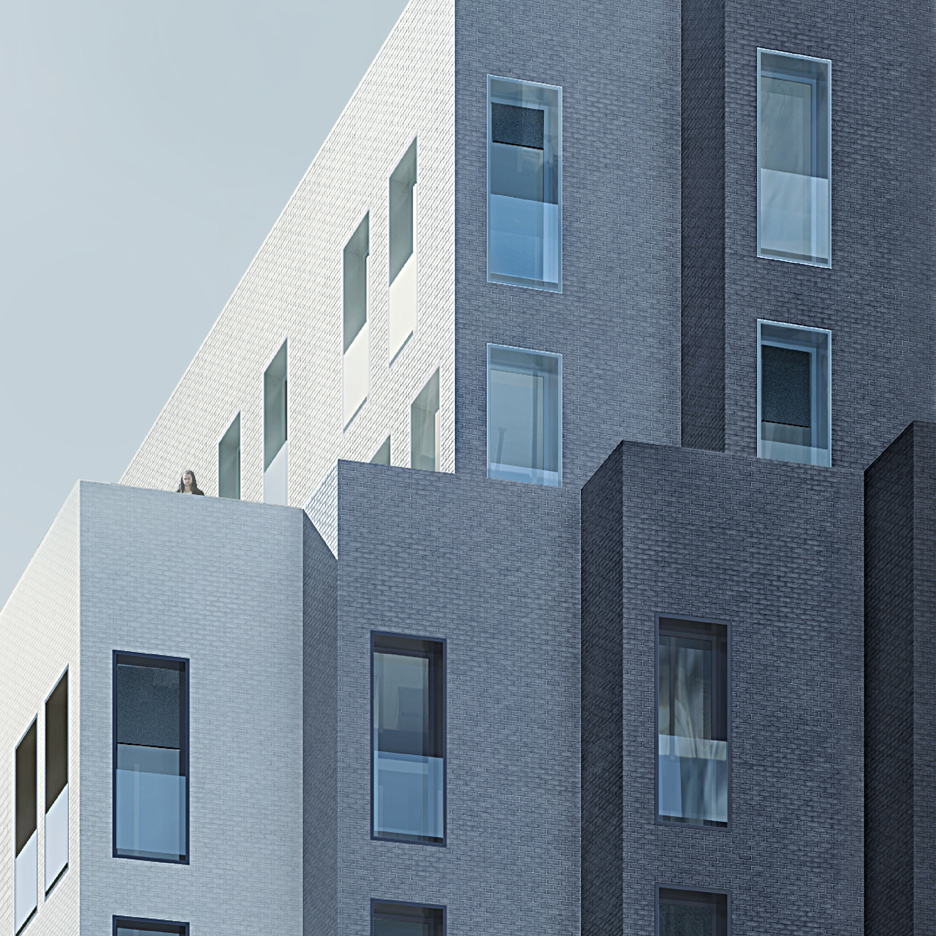 On-site construction began in March. The modular units are being stacked and bolted together, along with stairs, an elevator and other shared spaces. The building's facade will feature four different shades of grey brick, with varying textures.

"The project focuses on quality and livability through features that highlight the use of space, light and air," said nArchitects of the design.

Units will feature ceiling heights rising nearly 10 feet (three metres) and Juliet balconies. Each apartment will have a compact kitchen, a combined living and sleeping area, a bathroom, a closet and overhead storage space.

Shared amenities for tenants will include a gym, a small lounge, a roof terrace, bicycle storage and a garden.

"By incorporating setbacks as a governing design logic, My Micro NY could in principle be adapted to many sites, at a range of heights and floor area ratios, and at nearly any location in a block," said the firm.

The adAPT NYC competition was a part of Bloomberg's New Housing Marketplace Plan, which aimed to produce additional, affordable housing choices for one- and two-person households – a growing demographic in the city.

"The city's housing codes have not kept up with its changing population, and currently do not allow apartments smaller than 400 square feet, nor an entire building of micro-units," said the firm.

The mayor's office waived some of its zoning regulation to enable My Micro NY to be constructed.

It will be the first micro-unit apartment building in New York and one of the first multi-unit Manhattan buildings featuring modular construction.

Rohan Silva, former senior policy advisor to UK prime minister David Cameron, said in a recent interview with Dezeen that creatives are leaving New York for Los Angeles due to sky-high prices and lack of suitable studio space – and the same could happen in London.