The Austrian architect is pioneering the use of robots at one of his latest projects – the Museum of Contemporary Art and Planning Exhibition (MOCAPE) in Shenzhen.

A team of robots will assemble the museum's irregularly curved stainless-steel centre, saving time and money. Led by a building information modelling (BIM) system, they will mould, assemble, weld and polish the hyperbolic metal plates.

"Normally this part of the building would take eight months with 160 workers on the site," said Prix. "Now we need eight workers on site, and it takes 12 weeks."

In an exclusive interview with Dezeen, Prix said the technology will give architects more freedom to invent.

"Using robots, we can construct buildings in a very short time and very economically," he said. "So that opens up a really great possibility for investigating a new aesthetic."

Combining robots with the use of 3D-printed building components will make it much easier to create buildings with complex shapes, Prix said. The architect also believes the technology could be used to provide housing for refugees around the world.

"I think the combination of robotic construction and 3D printing is the future of the building industry," he told Dezeen.

"Right now we have problems because there are hundreds of thousands of refugees, and building houses for them is very complicated. If you use bricks or wood or concrete, it takes a while. But if you 3D print prefabricated parts and use robots to put them together, it is very economic and very fast." 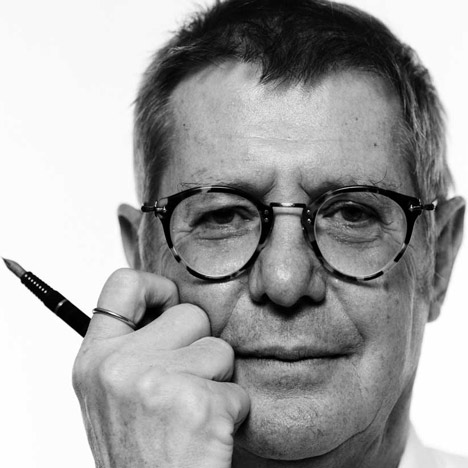 Coop Himmelb(l)au has a reputation for creating complex buildings, with examples including the contorted steel Dalian International Conference Center, also in China, and the Martin Luther Church in Austria, which features a whirlpool-shaped roof.

Prix insists that eradicating traditional forms of architecture is not his aim, but he called for an end to what he dubs "cheap boxes".

"We have to find a way out of the standstill of our profession – there must be no more boxes," he said.

"The simultaneity of systems is what our complex world needs to have," he added. "There should be traditional conservative shapes next to the most progressive freeform. That is the expression of our time."

Prix credits himself as being of the founders of the Deconstructivist movement in architecture – a strand of Postmodernism concerned with distorting and fragmenting traditional forms. He established Vienna-based Coop Himmelb(l)au in 1968 alongside Helmut Swiczinsky and Michael Holzer, both of whom have now left the firm.

The architect previously hit the headlines in 2012 when he launched an attack on the Venice Architecture Biennale, claiming that it places too much importance on celebrity.

Read on for full transcript of our interview with Wolf D Prix:

Amy Frearson: I understand you're using robotic construction on your museum project in Shenzhen. Can you tell me more?

Wolf D Prix: So part of this building will be built by robots. And this is amazing! Because it gives us the possibility to build more complex shapes. Normally these forms are more expensive and take more time. But now, using robots, we can construct buildings like this in a very short time and very economically. So that opens up a really great possibility for investigating a new aesthetic.

Normally this part of the building would take eight months with 160 workers on the site. Now we need eight workers on site, and it takes 12 weeks. The company we are working with is also building submarines and parts for cars. They don't only do it for the Chinese market, they are preparing to bring these kinds of new possibilities to Europe and Africa.

Amy Frearson: How did you become involved with this robotics company?

Wolf D Prix: When we built the Musée des Confluences in Lyon, which was finished one year ago, I said to the company working on the skin of the building, "why don't you use robots?" They said, "we don't need it, it's too complicated". This is the usual explanation when people don't want to innovate.

But in China, when we started to build MOCAPE, we looked for a company that could do it. Right now we're negotiating how and when we will start this new kind of production on site.

Amy Frearson: What parts of the construction will the robots be responsible for? The whole building or just certain parts?

Wolf D Prix: Not everything. There is a metal part inside that is the brain of the whole building. It is made from stainless steel and it is shaped, let's say, like a cloud. It is a very complex shape, because we took wind as the generator of form.

Amy Frearson: Do you think these kinds of processes will become the norm for architecture in the future?

Wolf D Prix: Yes, if you combine 3D printing and assembling by robots, then the building industry has more chances than ever. Right now we have problems in Austria because there are hundreds of thousands of refugees, and building houses for them is very complicated. If you use bricks or wood or concrete, it takes a while. But if you 3D print prefabricated parts and use robots to put them together, it is very economic and very fast.

I think the combination of robotic construction and 3D printing is the future of the building industry. It gives the architect more freedom to invent. The ideas that right now are killed, by the argument that it costs too much or it takes too long, will be not killed any more.

Amy Frearson: Do you think, as these technologies become widespread, that traditional forms of architecture will become obsolete?

Wolf D Prix: No, I'm not going to exclude other things. The simultaneity of systems is what our complex world needs to have. There should be traditional conservative shapes next to the most progressive freeform. I can imagine that next to a building by David Chipperfield, Greg Lynn could build something like his sailing boat. That is the expression of our time.

Amy Frearson: Do you think that the role of the architect will change, in light of these advancements in technology?

Wolf D Prix: If we don't change our attitudes then the end of our profession is very close. The architect will become the slave of the investor. "Come here architect, paint it a little bit red." This is the future if we don't fight for our rights.

Usually the architect gets a lot of responsibility, but at the same time the project manager takes away the power to act responsibly. At the very end they always blame the architect – his architecture is too expensive, his architecture takes too long. Some architects react and build cheap boxes which are not really cheap, but they say they are cheap and everyone believes it. But if you go for new ideas then the killing argument is on the table, namely it's too expensive and it takes too long.

We have to find a way out of the standstill of our profession – there must be no more boxes.

Amy Frearson: Is this project a one-off, or will you start designing all of your buildings with robotic fabrication in mind?

Wolf D Prix: You have to repeat this experiment again and again and again. Then sooner or later the companies will take it because it's cheaper for them to use it than to hire 1,000 workers onsite.

But, for example, in Austria the building industry is an indicator of economic growth. If Austria has to fire workers on the site, it will create great social problems. So what we are doing right now, we are working on research programmes, to avoid social problems that could be caused by using robots. People should not lose their jobs. We have to train them in another way and teach them to understand and handle complex solutions. I think this is the next step in changing the building industry. It is a very complicated problem but we have to solve it, otherwise we will get big problems. And this is the right strategy: solving problems before problems become problems, and this is our architectural strategy too.