Berlin architect Volker Staab has won a competition to extend the Bauhaus archive and museum in the German capital, designed by founder Walter Gropius in the 1960s.

The new 6,700-square-metre extension will create new exhibition galleries for the Bauhaus-Archiv and Museum für Gestaltung, which holds the world's largest collection of materials on the history of the Bauhaus art school.

It will comprise a series of underground galleries, a one-storey block along Von-der-Heydt-Strasse, and a five-storey glazed tower described by the competition judges as "delicate" and "almost frail".

"Volker Staab has given us a design that will cause a sensation," said Regula Lüscher, the senate director of urban development for Berlin.

"It has an attractively modest quality," she continued. "An open, flexible museum setting will be created that upholds the experimental quality of the Bauhaus. It will attract people to meet up there, exchange views and rediscover the many different aspects of the Bauhaus idea." 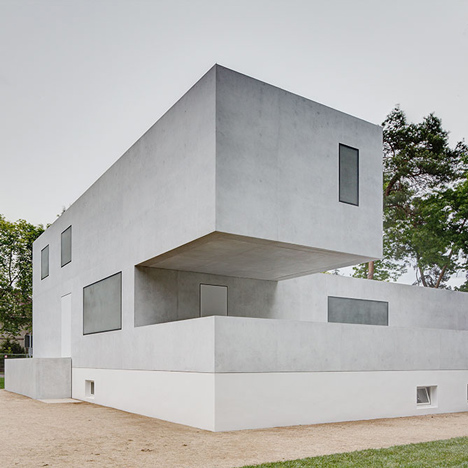 German architect Walter Gropius founded the Bauhaus in 1919. It went on to become one of the most influential art and design schools of the 20th century, teaching Modernist principles across a variety of creative disciplines.

Gropius first drew up plans for an archive and museum for the school in 1964, although it wasn't realised until 1979. The most distinctive characteristic of the building is the unusual profile created by its fin-like shed roofs.

But the existing space is now too small to cope with its growing visitors, which have doubled in the last 10 years, reaching 115,000 in 2014. The new building will allow the museum to separate its exhibitions from its archive.

"The Bauhaus-Archiv will be receiving an exciting, appealing, experimental building that will meet the needs of a 21st-century museum," said Monika Grütters, the German minister of state for culture.

"It leaves plenty of space open for creativity – a space that will be worthy of the world's most important Bauhaus collection."

Tim Renner, the German secretary of state for cultural affairs, added: "It will be an appealing, experimental, exciting building that will meet the needs of a 21st-century museum and will offer plenty of space for interaction, creativity, and the world's largest Bauhaus collection."

Staab's proposal was selected ahead of 40 other designs by a jury chaired by architect Hilde Léon. His firm wins a prize of €190,000 (£136,000). Four other entries were also awarded, while four further designs were given special mentions.

The federal government and the state of Berlin are co-funding the project, each with a contribution of €28.1 million (£20.2 million). More than half of this will go towards renovating the existing building, and the remaining amount will cover the cost of the extension. Work is expected to complete by 2021.

A competition was also recently launched to design a new Bauhaus Museum in Dessau, where the famous school was based between 1925 and 1932. Two winners were named, a team from Barcelona and a team from New York.

More from the Bauhaus