Chicago Architecture Biennial 2015: Sou Fujimoto Architects has created an installation consisting of everyday items, from potato chips to an ashtray, that represent the Japanese firm's philosophy that "architecture is first found and then made".

Titled Architecture Is Everywhere, the installation was created for the Chicago Architecture Biennial, which opened 3 October and runs to 3 January 2016.

The tables are evenly dispersed in one of the gallery rooms in the Chicago Cultural Center – the main exhibition venue for the Biennial. Visitors are invited to walk through the grid of tables and examine the objects up close.

"The notion of 'found architecture' is represented by juxtaposing human figures and ordinary objects found in everyday life, with contexts that might seem coincidental at first, if not fortuitous," said the firm. "This operation makes us to start to read these objects as architectural spaces."

"One of the key ideas behind Sou Fujimoto's practice is that architecture is first found and then made," the firm added. "Just as our ancestors found their habitat in caves and woods, we discover ours among the many things we encounter in the immense urban jungle."

The firm said its approach can be traced back to "readymades" by Marcel Duchamp, his famed art pieces made of everyday objects, such as a comb or a porcelain urinal. 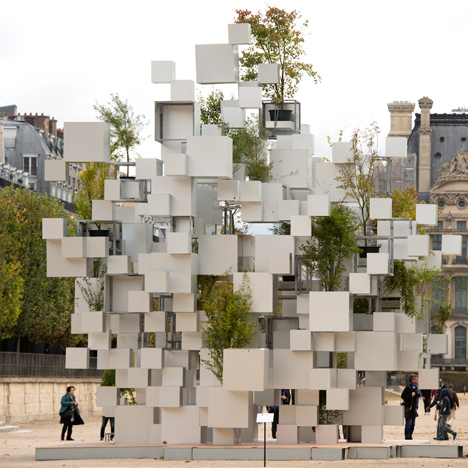 The firm also cited work by music composer John Cage, such as a concert in which musicians played no music and the focus instead was on the basic sounds made by audience members.

"Architecture is Everywhere aims to radically question the boundary between 'found' and 'made' architecture," said the firm.

Sou Fujimoto Architects was founded in 2000 in Tokyo. In 2013, Sou Fujimoto became the youngest architect to design the annual summer pavilion for the Serpentine Gallery in London. His other projects range from a "nomadic" house installation in Paris to the Musashino Art University Museum and Library in Tokyo.

Related stories: see all our stories about Sou Fujimoto

Installations on view at the Chicago Architecture Biennial include a prototype for low-cost housing by Vo Trong Nghia Architects, a rock sculpture built by a robot, and a proposal for a utopian city by WORKac and Ant Farm.

Described by curators Sarah Herda and Joseph Grima as a "site of experimentation," the Biennial features work by more than 100 designers around the world. The three-month-long event includes installations, exhibitions and events.