Designed by New York firm LHSA+DP, the Muzeiko science centre is billed as the "first children's museum to be built in post-Soviet Eastern Europe".

It was commissioned by the America for Bulgaria Foundation, a charity set up to foster links between the two countries.

The three faceted structures all overlap the rectilinear form of the museum's main building.

Their forms were designed to pay homage to Romania's 14 mountain ranges, while the colours and patterns reference the textures and designs of the nation's traditional craft.

The green portion is modelled on textiles and embroidery, the red section takes its cues from glazed ceramics and the brown segment references traditional wood carving. 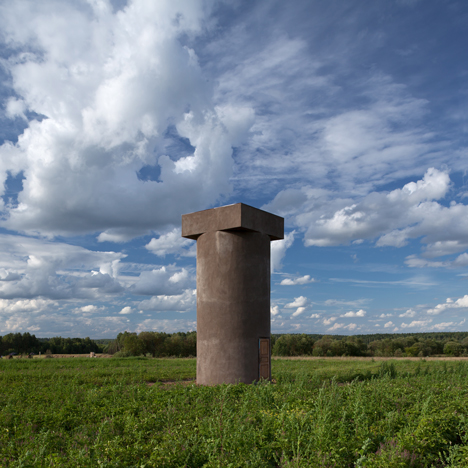 "The structure's glass volume is interrupted by three sculptural forms, or mountains, each referencing through its colour scheme and texture indigenous craft traditions in the country."

"The museum utilises large areas of glass to reveal the interior, and create a feeling of openness and transparency about the activity inside, in contrast with most Bulgarian museums that appear imposing and monumental," explained the architects.

Exhibits are organised as a "journey moving through time and space" beginning with the past on the lowest level, the present on the ground floor and the future on the top floor.

A cave-like portion in the basement hosts archaeology, geology and paleontology exhibits, while the ground level presents contemporary environmental pieces, and technology and space exploration displays are located on the first floor.

The 3,250-square-metre facility, which achieved an energy efficiency LEED rating of gold, features a green roof with a climbing wall, observation point and an amphitheater. At ground level, an outdoor "science playground" contains a wind turbine and a pond.

Earlier this month a children's museum opened in the base of David Adjaye's Sugar Hill housing project in Harlem, New York, while Kada Wittfeld Architektur recently designed a museum dedicated to the fairytales of the Brothers Grimm for the German city of Kassel.