The exhibition includes singular cocooned lamps, as well as furniture hybrids that feature lights emerging on plantlike stems from tabletops. 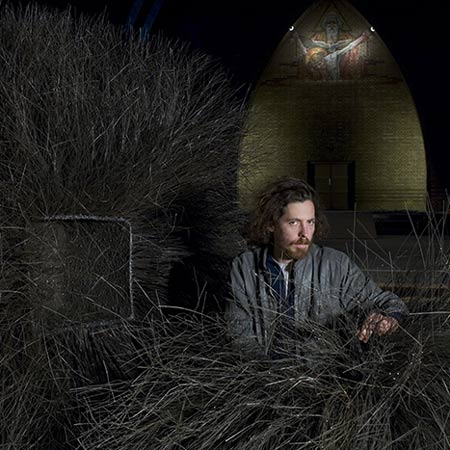 Bush of Iron by Nacho Carbonell

In one piece, the forms of a chair and shelf are merged together with a cluster of lights sprouting out of the top of the shelf, while another features a single stem extending from the corner of a table into several organically shaped branches, each holding a lamp.

Carbonell has previously experimented with pairing different furniture shapes together in his Diversity series, which combined tables and chairs covered in materials including gravel, thorns, corn and broken glass.

The lights in the Cocoon sculptures are surrounded by crumpled metal mesh which has been covered in plaster, creating a semi-transparent effect. 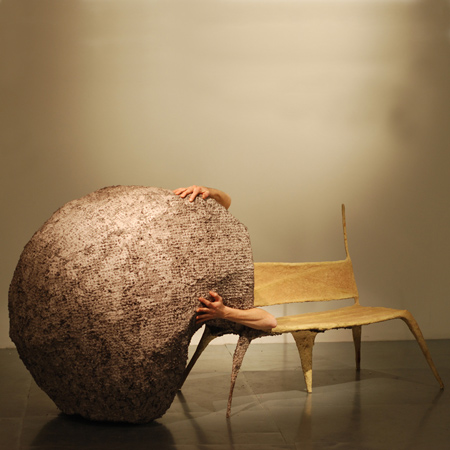 "I like to see objects as living organisms, imagining them coming alive and being able to surprise you with their behaviour," said Carbonell.

"I want to create objects with my hands, then I can give them my personality," he said. "I turn them into communicative objects that can arouse one’s sensations and imagination."

"In short, what I want to create are objects with a fictional or fantasy element, that allow you to escape from everyday life," he added.

Other lights in the show rest on stems set into concrete bases, resembling hot air balloons attached to baskets. Carbonell has used subtle gradient colour effects in the plaster, which are highlighted when the lights are turned on.

The designer previously experimented with unusual shapes in his Skin collection of furniture, which featured an elastic outer covering that would shrink and stretch depending on objects placed inside the pieces.

The Light Mesh exhibition opened on October 7 and remains open until 20 November, at the Carpenters Workshop Gallery in London.