Scott & Scott hoped to create a connection between the property and its setting – an area of forest at the base of Grouse Mountain – so chose to update the interiors using wood that will visibly change with wear.

"The design was an edit of the house with a respect for the original details and its connection to the mature forested yard," architect David Scott told Dezeen.

"The materials used were selected for their contrasting strengths, and minimally finished using traditional methods that are maintainable and acquire visible signs of use over time," he continued. 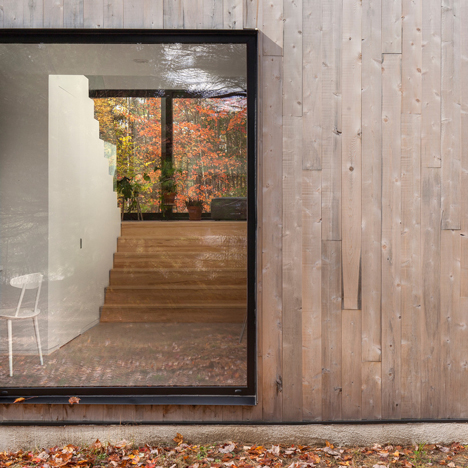 The walls of the living spaces were stripped and repaired, before being coated in a natural lime-based white wash. The pale Douglas fir beams were finished in white lye, while the wooden flooring and soffit were coated in a cloth-applied pigment oil.

In the main living room, the original enclosed stair was replaced with an open staircase made from black steel and fir.

Although there was little change made to the property's existing floor plan, plywood cabinet blocks were used to separate the living, kitchen and reception areas, while also providing concealed storage.

In the kitchen, solid ash was used to create open-front storage to display the owners' collection of studio pottery.

An 800-kilogram bespoke marble counter spans the length of the wall, and provides a sink and worktop space.

"The marble counter monolith was milled from a block that we selected from the Hisnet Inlet quarry on Vancouver Island near our own alpine cabin," said Scott.

Scott and Scott was founded at the start of 2013 by husband and wife David and Susan Scott. Since then, the duo have also designed the interior of a pan-Asian restaurant in Vancouver and a currywurst restaurant featuring peg holes on the walls.