The local architecture studio designed the BMX Supercross Legacy Project for the sporting event, which was held in Toronto during July.

Riders launched themselves onto the undulating dirt track via ramps enclosed in a board-marked concrete and steel-slatted structure.

The two starting hills measure 10 and five metres tall, and provided launchpads for both professional and amateur racers. The 517-metre-long course weaves towards a spectator stadium placed alongside the finish line. 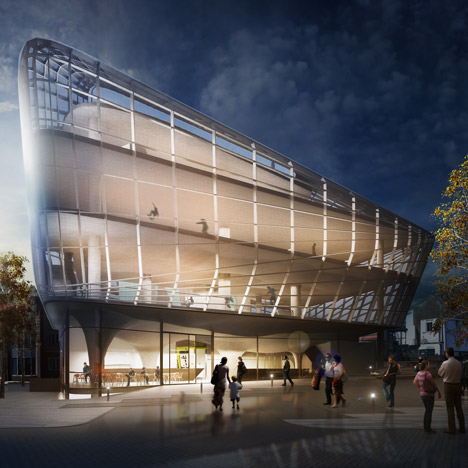 "It is an object in a landscape and a landscape in its own right," said the architects. "Board formed concrete, pre-finished concrete block and a smooth faced framing members all add to the distinct language of each element. At once separate and unified."

"The aesthetics of concrete allowed the practical considerations of storage, ramp heights and retaining wall sections to each be expressed as architectural elements within a single form."

The track was designed to the stipulations of regulatory board Union Cycliste Internationale (UCI), making it the only UCI-certified track in Canada. BMX was first recognised as a medal sport during the 2008 Beijing Olympic games.

The track is set on a low-lying part of the site where water naturally collects. But race criteria meant the course needed to be dry just 30 minutes after rain, so the architects designed an underground drainage system.

The Pan American Games has taken place every four years since 1951, when the inaugural event was hosted in Buenos Aires. Toronto became the second Canadian city to host the games, which is beaten in scale only by the summer Olympic Games and the Asian Games.

A shooting range based on the jagged outline of a maple leaf was also designed by Berlin firm Magma Architecture for the 2015 games, where gymnastics, equestrian and ball sports tournaments were also held.

Photography is by Scott Norsworthy.

More architecture and design for sports