Caruso St John Architects has unveiled plans for a new £160 million biomedical laboratory at University of Basel, Switzerland, which features a gridded glass facade and a concrete base with arch-shaped notches.

The firm saw off competition from studios including David Chipperfield Architects with its proposal for the 35,000-square-metre building, which contains six floors of laboratories. Hollows in the concrete base of the Department of Biomedicine will form entrances and make sure the building clears a footpath. The upper storeys will be covered in a panes of glass measuring 80 by 80 centimetres, providing views into the laboratories.

"The large volume of the new building for biomedicine is uniformly covered with a skin of cast glass," said a statement issued by the studio. "The glass is transparent and clear and it allows all workstations an unobstructed view. But the glass is also thick, which corresponds to the curved details and its rounded corners."

The building will be attached to the university's pharmaceutical centre in the St Johann district of the city.

It will replace the institution's existing laboratory and teaching building, and stand on a site near other medical science departments and university hospitals. 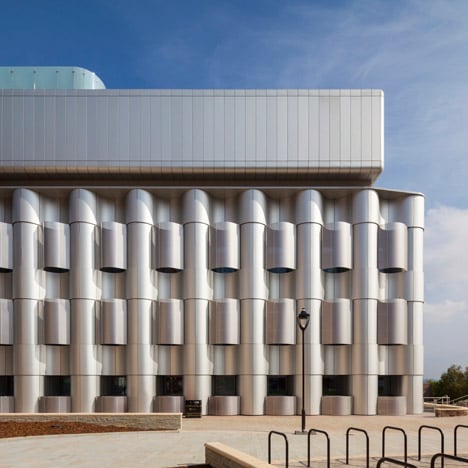 Aside from testing laboratories, areas of the building will be dedicated as offices, conference rooms, and for keeping rats and mice.

An inner layer of pigmented glass will sit behind the building's gridded facade, designed to cast subtly coloured reflections.

Curving glass walls will enclose stairwells, while corrugated glazing will surround offices and laboratories. The project is due to complete in 2022.

Caruso St John Architects recently converted a row of theatre warehouses into a gallery for British artist Damien Hirst, and completed the third and largest of the Gagosian's outposts in London. Previously, the firm undertook a £45 million renovation of the Tate Britain.