Wolfgang Natlacen's ovoid funerary urns can rock like a Weeble toy to offer an alternative to the "grey and sad conformism of death" (+ movie).

Named Misirizzi – which literally translates as "roly-poly" toy – the containers are designed as an irreverent take on the traditional urns used to store remains.

The container rests on a curved base, and is constructed from rot-resistent acacia wood – the same material often used by ancient Egyptians for sarcophagi. It can be coated with a glossy back or gold finish.

According to Natlacen, the urns offer an alternative to the "grey and sad conformism of death" and were informed by his studies into Egyptian funerary art. 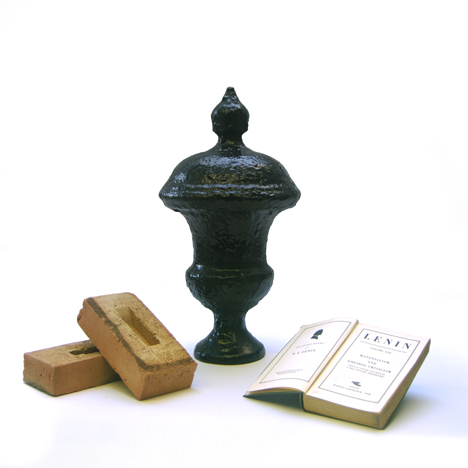 "Between canopic and libation jars, I tried to update that shape by giving it a double use," the French designer told Dezeen.

"The urn is then not any more confined to the dead person but becomes more digestible, mixing business (the coffin) with pleasure (a work of art, a toy)," he added.

The heaviness of the acacia wood allows the urns to wobble back and forth when pushed without falling over.

"It is then possible to live, to play, with this Weeble without necessarily dramatising death," said Natlacen. "Coexistence between the living and the dead becomes lighter."

The containers are divided into two halves, and the top section can be lifted off to reveal a hollow space for storing and protecting ashes.

The urns are part of Natlacen's ongoing fascination with funerary design, which prompted the designer to create a tomb shaped like a picnic table in 2010.

"By making this I thought I anticipated, or settled, a problem," he said. "However I realised that the tomb was not enough. I had to take care of the rest: coffins, urns... "

French-German designer Geraldine Spilker suggested an alternative approach, with a process that would bind ashes with resin, which could then be used to create a small biodegradable memento object.