Swedish architecture and design studio Claesson Koivisto Rune has combined wool and vegetable-tanned leather to craft a cremation urn, which will naturally break down in soil once it is buried.

Commissioned by Systrarna Ocklind, an independent funeral home in Stockholm run by sisters Anna and Sofia Ocklind, the Ocke urn is designed to biodegrade almost entirely in a matter of months, according to Claesson Koivisto Rune.

The studio used wool to form the urn as it says the material provides a sense of warmth and protection while reducing the product's impact on the environment.

"Textile burial cowlings have been used for bodies and caskets since the beginning of history," Claesson Koivisto Rune co-founder Mårten Claesson told Dezeen. "Probably it is a question of nursing and care that lies deeply rooted within us, regardless of tradition or belief."

"Wool is also of course a natural fibre that has been used to warm humans throughout history, with the unique ability to hold warmth both when dry and moist," he added.

"In this case, these functions are of course symbolic and that is where the importance lies. There is a comforting symbolism in the fact that everything goes back to the earth 100 per cent."

In Sweden, the ashes of the deceased are generally collected in a bag and delivered from the crematorium to the funeral home in a recycled cardboard box in accordance with tradition and regulation.

The cardboard box is then discarded before the ashes are transferred to an urn made from ceramic or wood, which is buried in the ground.

In contrast, Claesson Koivisto Rune designed the woollen Ocke urn to fit around this cardboard box like a "kind of shroud" in order to prolong the packaging's useful life.

"As a designer, this may be the project of ours where it was most important not to over-design," Claesson said. "It's not just about the inherent dignity of the materials but also about being humble in its design."

The urn, developed alongside manufacturer Falköpings Träindustri, is constructed from sections of woolen fabric that are sewn together with woollen thread.

Their connective seams are left exposed and serve as decorative features, creating a "ribboned effect" that lends the urn a softer appearance. 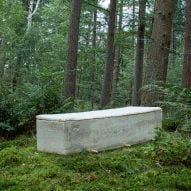 "Even though these burial urns are intended to be interred in the ground, they are held by the bereaved before being buried," said the studio. "And so developing a softer, warmer design was important."

The Ocke urn also features details made of vegetable-tanned leather, which would take considerably longer to biodegrade than the wool or the cardboard. This includes a closure that can be looped to form a handle and used to lower the urn securely into the ground.

Ultimately, the design represents a break from tradition within a highly conservative industry, Claesson argues.

"This is an unusual assignment for us," he explained. "The funeral homes of Sweden are dominated by a few chains and Systrarna Ocklind is a very rare independent funeral home."

"The two sisters are daring to offer an alternative, also by introducing an urn that is so different to what anyone has seen before – and this in a trade where you don't break with tradition easily."

A number of designers have started rethinking polluting burial methods in recent years.

TU Delft researcher Bob Hendrikx created a living coffin made from mycelium that helps bodies decompose faster, while graduates from London's Royal College of Art developed a way to form artificial reef structures from cremated ashes in a bid to provide a "meaningful funeral service" that regenerates endangered ecosystems.

The photography is by Ida Borg.