Students at the Massachusetts Institute of Technology have designed and built a 2,000-pound sculpture that can be rocked, rotated, lifted, and hauled upright with minimal effort (+ movie).

The object was created using a digitally-controlled milling machine to cut foam blocks according to a computer-generated design. This foam core was then covered with layers of fibre-reinforced concrete to create a hard and heavy outer surface.

Although the object weighs 2,000 pounds (907 kilograms), it can be moved with a fingertip, according to Clifford. It can also be hoisted upright by just a small number of people.

Clifford and Jarzombek began the project by asking students to work out how monumental structures had been built by ancient civilisations like the Incas in Peru or the inhabitants of Easter Island.

The students were then asked to design a sculpture that displays similar ideas about balance and weight, and could also "perform" by being easy to move.

The object designed by the students is reminiscent of an abstracted Easter Island head, but has more rounded edges and planes. These features distribute its weight in a way that allows the sculpture to be easily moved, according to Clifford.

"There are clearly some zoo/anthropomorphic characteristics to this megalith," Clifford told Dezeen.

"The original intention was not to produce something that looks like a face or a head, but in working through these calculations, the motivation of providing a spectacle that performs, forced the design to contemplate both of these motivations simultaneously (performance and perception)."

The concrete sculpture was placed on a green at MIT's campus in Cambridge, just off the Charles River from Boston.

The students produced a movie demonstrating how they could rock or spin the object, using boards underneath to allow it to slide or shimmy across the lawn. 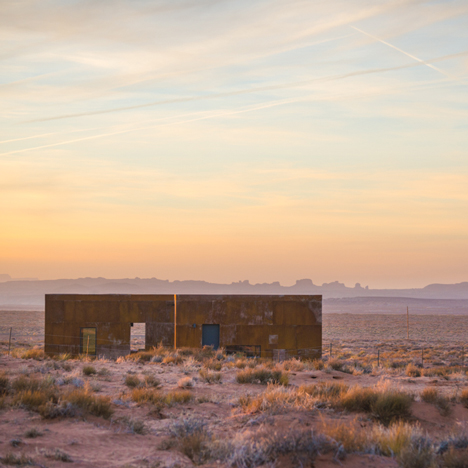 Using ropes looped through a hole in the object, just a few students could pull the object fully upright, with a few others providing a stabilising counterbalance from ropes on the other side.

A video showing how the 2,000 pound sculpture can be rocked, rotated, lifted, and tilted upright

"There was a moment of elation when it finally stood up," Clifford said. "It weighed more than a car and yet you could move it with a fingertip."

Clifford became interested in megaliths after reading research that suggested that the monumental heads of Easter Island were moved into place upright. Anthropologist Carl Lipo found that the sculptures had been made with a forward-tilting centre of gravity that could have allowed them to shimmied into place.

"There is so much knowledge trapped in these ancient civilisations that we aren't equipped to handle today," said Clifford.

He and Jarzombek set up the Megalithic Robotics course at MIT to combine their knowledge of computerised design and techniques used in ancient architecture. The course is one of a number of "cross-studio" initiatives at MIT created to encourage students and tutors from different disciplines to work together.

Clifford is the co-founder of US studio Matter Design, which recently completed an installation called Microtherme, an installation comprised of a wooden box concealing curved concrete surfaces heated at different temperatures.