Portions of the terminal's roof started to let in water earlier this month. The Port Authority of New York and New Jersey, which is overseeing the project, said the leaks had been caused by work on the Richard Rogers-designed Three World Trade Center tower above.

The transit terminal, whose design was first unveiled in 2004, is still under construction. It consists of an extensive network of subterranean pathways that connect to rail and subway lines and are lined with commercial space.

Above ground, a winged pavilion referred to as the Oculus will serve as the main concourse. The terminal is scheduled to officially open in early 2016, although some sections are already in use.

Construction of Rogers Stirk Harbour's skyscraper, which abuts the Oculus, began this summer. Crews working on the tower are spraying water to minimise dust as they break up concrete, and the water is seeping into subterranean portions of the transit hub, according to reports.

The Port Authority said the leaks are being addressed. "The dripping has been reduced dramatically. We've made some significant progress. Several spaces are dry," said Steven Plate, the director of World Trade Center construction for the Port Authority, in a statement. 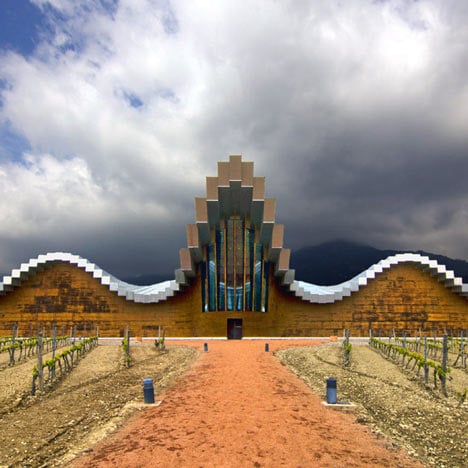 The transit hub's commercial spaces, owned by the Westfield Corporation, were initially scheduled to open this year.

More than 100 tenants have reportedly leased units within the terminal, including Apple, Michael Kors and Kate Spade.

"This is an enormously complex and unique project," Westfield said in a recent statement.

"We are cooperating and working closely with the Port Authority as they work to complete construction and meet the conditions for the delivery of the retail spaces."

Calatrava's transit hub has faced several setbacks since its design was revealed more than a decade ago.

The original scheme called for an operable roof, so that the building's two "wings" could move up and down, reinforcing the birdlike image that Calatrava aimed to convey.

The movable aspect of the roof was eliminated from the plans, but the project's price tag has ballooned to $3.9 billion (£2.5 billion), nearly double the original estimate.

Intended to evoke a bird in flight, the Oculus has a skeletal appearance, with arched white walls that resemble ribs. The steel building features an elongated operable skylight that measures 355 feet (108 metres) in length.

The interior of the Oculus contains a central oval-shaped area ringed by two levels of shops and restaurants.

The transit terminal is one of a cluster of buildings – some finished, others underway – on the 16-acre (6.5 hectare) World Trade Center site in Lower Manhattan.

Earlier this year, Norman Foster was replaced by Bjarke Ingels Group as the designer of Two World Trade Center tower, which is now under construction.

The World Trade Center Transportation Hub is not the first of Calatrava's buildings to cause controversy. In 2013, the owners of the Calatrava-designed Ysios winery in Spain launched legal action demanding he paid part of the £1.7 million needed to fix the building's leaky roof.

The City of Valencia also launched legal action against the architect last year after parts of the opera house roof at his City of Arts and Sciences complex began falling off just eight years after completion.