German designer Carolin Pertsch has used bundles of seagrass to create an eco-material that forms the seats for a collection of stools.

Pertsch harvested Zostera Marina seagrass from the German coast, where thousands of tonnes of it are washed up every year.

According to the designer, the aquatic plant – also known as eelgrass and seawrack – frequently ends up as special waste in landfills in order to maintain clean beaches for tourists.

"Regarding our resource-wasting society, there has to be a fundamental rethinking," said the designer. "I decided to challenge myself to see if there was a way to use the eelgrass as a material." 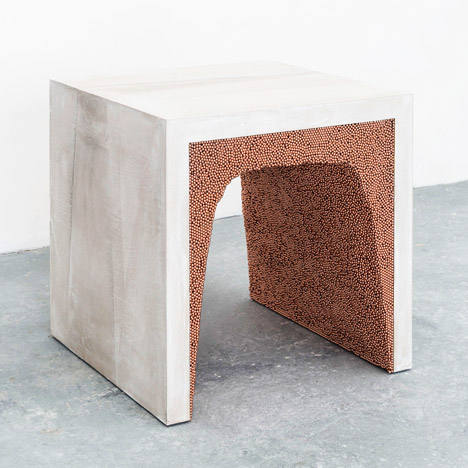 Pertsch combined shreds of the grass with a bio-resin produced from vegetable oil, creating a reinforced eco-plastic that she then moulded into stool seats.

"A big challenge was to find the right bio-based matrix in which the cleaned eelgrass could be bedded," she told Dezeen. "Before using the eelgrass it should be cleaned, and algae or little shells rejected.

"Everything started in the kitchen in our co-working space," she added. "Instead of cooking lunch, I put together natural ingredients, like starch, water and vinegar, for producing my own bioplastic, which I could use as a kind of glue."

Pertsch has designed three four-legged stools for the range, each of which features a subtly different shade of material – created by sorting the grass into different shades.

The embedded strands of eelgrass are exposed in the stools' seats which, according to Pertsch, feel similar to cork.

"Beside creating a new eco-material, another aim of these experimentations was to open people's eyes to think in new alternative ways for future materials," she said.

"There is no better way to confront people with a new material than in furniture. Furniture always needs an interaction between human and object. With its minimalism it focusses on the new eco-material."

"I chose a stool as an example to show the stability of the fibre reinforced eco-plastic," she added. "The one-centimetre-thick seat is stable enough to sit on."

Seagrass also featured in a range of furniture created by London designer Ilse Crawford for Ikea.

Swedish studio Glimpt had a more colourful take on the grass, wrapping rolls of it in the thread that's normally used to make hammocks to create a collection of stools.

Other experiments with furniture made from natural materials include Henry&Co's stool made of bound hay and grass, and Jonas Edvard and Nikolaj Steenfatt's seaweed and paper chair.