The ground-floor property is situated in the middle of a forest on the outskirts of the city, and has undergone a major renovation in order to make it useable as a family holiday home.

Interior walls had become damp and required drying before the team could restore them. Original threshing floors were covered over with bricks and wooden planks.

"The idea for the interior design to some extent refers to the old Mediterranean architecture," said Loft Szczecin founder Jacek Kolasiński. "Equipment and furnishings, in order to avoid banality, were supposed to be a little eccentric, mysterious and elegant."

All brick walls throughout the property are painted off-white. Much of the ceiling has been finished in the same way, but some red brick sections remain unpainted. 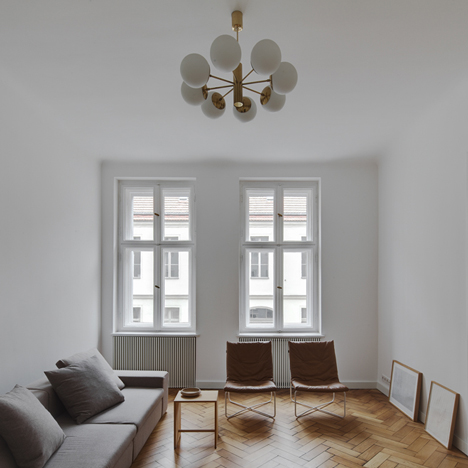 "The brick walls and ceilings were covered by a thick layer of plaster," Kolasiński told Dezeen. "All of the surfaces were cleaned of plaster to expose red bricks. It was very repetitive so the walls were lightly covered with plaster and painted white."

"The floor was sand, and was completely covered with old bricks that came from demolitions of industrial buildings in Poland. In the kitchen the floor is covered in old beams, also from Poland."

In communal areas, doors were removed to create an open-plan circulation. Grey armchairs tucked away in a small nook were created in a small Polish factory in the 1950s.

"The four grey armchairs used in the interior were bought at auction and required complete restoration," Kolasiński said. "These are very rare pieces created in a small factory in Zadziel, near Żywiec in Poland, that specialises in Bauhaus style."

"The factory was then forced to produce only medical furniture because the party and authorities from those years thought that products from Zadziel were too avant-garde," he continued.

Stainless-steel countertops and a long wooden table were installed in the kitchen. Other furniture pieces, including a leather chair, are from the designers' personal collection.

"The kitchen furniture, including the raw wooden benches and table, are often part of the furnishing of old Mediterranean houses," Kolasiński told Dezeen. "In this apartment there is also a well, which is typical of very old houses for in Spain."

Most of the furniture and accessories used around the rest of the property are mid-century pieces from the Czech Republic and Denmark.

Photography is by Karolina Bąk.