New York architect Steven Holl has finally received the go-ahead to build a pair of skyscrapers in Copenhagen harbour, linked by a pedestrian and cycle bridge 65 metres above the water's surface.

Nearly eight years after winning a competition for the site, Steven Holl Architects has revealed that its Copenhagen Gate proposal now has a construction date pencilled in for 2016.

The proposal includes two hotel and office towers on opposite sides of the harbour: Gate L on the Langelinie pier side, and Gate M on the Marmormolen wharf side. 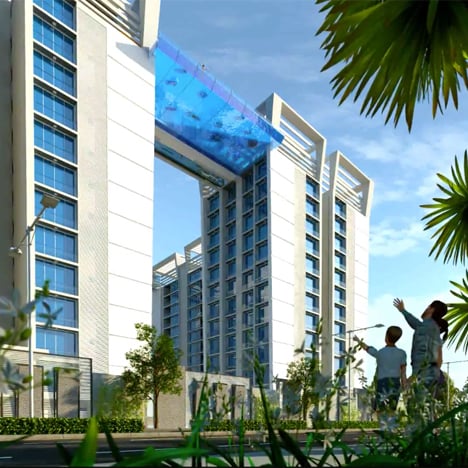 An angular pedestrian and cycle bridge will connect the two towers, raised 65 metres above the harbour to allow enough clearance for cruise ships to pass underneath.

Steven Holl Architects was unanimously selected by competition judges in October 2008. But construction was delayed as a result of the global economic recession, according to the firm.

"Construction has been delayed by the economy, but is planned to start in 2016/17 if rental efforts are progressing satisfactorily," said a statement on the architect's website.

This isn't Holl's first linked skyscraper design – in 2009 he completed Linked Hybrid, a group of eight linked towers in Beijing, China. He also completed a "horizontal skyscraper" in Shenzhen in 2010.

Set to be the most ambitious scheme yet, the Copenhagen structures will use steel cables to support the weight of the bridge, which will meet at an angle "like a handshake over the harbour".

The underside of the bridge will be coloured in bright shades of yellow and orange, and its aluminium surfaces will be lit at night to create reflections on the water below.

Other Steven Holl projects under construction include a public library in New York's Queens neighbourhood, a Maggie's cancer-care centre at London's St Bartholomew's Hospital and a new building for the University of Iowa.