A swimming pool with a glass bottom spans the void between two Parisian tower blocks in this proposal by architect Tommaso Bernabò Silorata, which aims to give swimmers a "vertiginous diving experience".

Bernabò Silorata's design features a swimming pool with a glass base and sides that bridges the gap between a pair of matching 58-storey skyscrapers.

It is the latest in a spate of proposals for suspended pools with glass bottoms – including a "sky pool" between two 10-storey apartment blocks near London's Battersea Power Station and a rival glass-bottomed swimming pool spanning 12-storey-towers in the Indian state of Gujarat.

"The rooftop pool acts like a beam connecting both parts of the building and offering a vertiginous diving experience," said Bernabò Silorata. 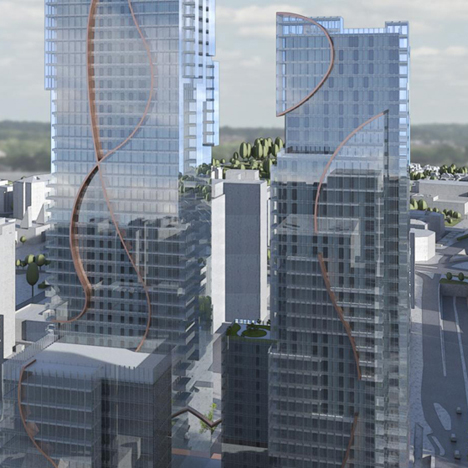 "The visitors can feel like they are flying in the sky. The bottom of the pool is formed completely transparent so that the diver looks down to the internal void of the building."

The void between the two blocks would feature plant-filled terraces that aim to provide views towards the River Seine for hotel guests, as well as providing a "park filter" for the blocks to the rear.

A restaurant and bar would sit on either side of the rooftop pool, which corresponds with a second pool in the ground-level courtyard and gives views into the planted void.

The 75,000 square metres of floor space would include offices and hotel rooms, as well as an underground car park, auditorium and gym.

The skyscraper duo could be seen as a feasible proposal, thanks to the recently lifted height cap for new buildings in Paris. A restriction was imposed after the construction of the much-maligned Montparnasse Tower in 1972, but was relaxed after 2010.

"Although Paris is one of the biggest and fast-changing metropolises of the world, the Parisian skyline appears rather restricted to regulations that aim to preserve the existing landscape, limiting opportunities for vertical expansion of the city," said Silorata.

"Skyframe responds to the above challenge by integrating an 'absent shape' into the Parisian skyline," added the architect. "The building is conforming to a regular shape inside which a more complex negative shape is growing that acts as a landmark for the city."

Herzog & de Meuron recently won planning permission for a 180-metre-high block with a triangular profile in Paris. Known at the Tour Triangle, it is the first skyscraper to be approved the capital in over 40 years.