Movie: American designer Marc Thorpe reveals which vegetable influenced his Husk chair for Moroso in our next exclusive movie for the Italian furniture brand.

Thorpe's Husk chair for Moroso features a simple seat, supported by a large curved backrest that wraps around it.

This form was inspired by the outer leaves that protect an ear of corn, Thorpe explains in the movie, which was filmed at the 2015 Salone del Mobile furniture fair in Milan.

Husk is available with either a high or a low backrest. Thorpe created an upholstered version for interior use, as well as an outdoor version.

The outdoor version is available as part of Moroso's M'Afrique collection, which is manufactured in Dakar, Senegal. 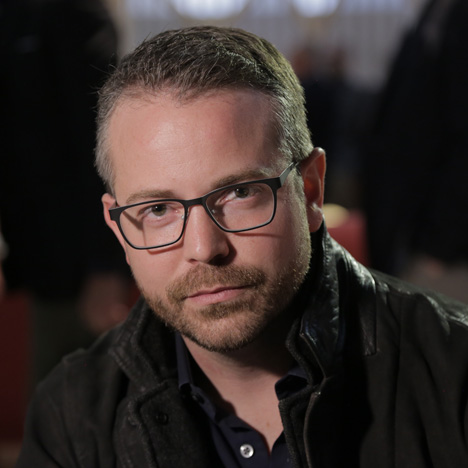 "America is not a style, America is an idea" says Marc Thorpe

"It is all produced by local craftsman using a tubular steel structure that's woven with the threads," Thorpe explains.

The indoor version of the chair is upholstered in a special fabric that gradates from a darker colour to a lighter one.

Thorpe first developed the fabric together with Moroso and Dutch textile company Febrik for his Blur sofa, which was launched by the brand in 2011.

"I actually invented the Blur fabric," Thorpe says. "We wanted to figure out a way to produce a knitted textile that would graduate, which is extremely difficult. It look a long time, but we were able to pull it off. We have continued to use that fabric on my work but also throughout the collection at Moroso."

Thorpe says he enjoys working with Moroso because creative director Patrizia Moroso is so "passionate about textiles".

"She's very closely connected to the fashion industry," he says. "So working with her to develop a textile is quite a privilege."

"I think in that space you can pretty much create anything and I think that's what Moroso is about, creating great ideas."

This movie was produced by Dezeen for Moroso. The music used is a track called Qix by UK producer 800xL.

It is the latest in a series of movies about the Italian brand's 2015 products, which you can watch on our YouTube playlist: