Built Architecture co-founders Diana Carbonell and Jaime Batlle worked alongside architect Victor Alavedra on the project. One long oak cabinet creates a spine that runs longways through the old apartment, which is now named Casa AB.

One wing of the V-shaped plan is occupied by a dining room, lounge and kitchen, while the other branch contains a bedroom and bathrooms.

The apartment is located in Barcelona's Eixample district. Nook Architects squeezed an extra bedroom into an old apartment in the same area, while local architecture student Adrian Elizalde used sliding doors to subdivide a 1930s flat nearby.

Like these homes, Casa AB still features its colourful tile floors. Built Architecture has paired these with oak floorboards, matching the new joinery.

"This is a Modernist flat in Eixample where original values are recovered and acclaimed through a new central furniture element, which must be as singular, surprising and innovative as it is discrete, flexible and respectful, always responding to the needs of the user and favouring the life that will develop around it," said Carbonell, Batlle and Alavedra.

"Consequently, the project is best understood as an art gallery whose main objective is to offer the best possible frame to exhibit art whilst at the same time providing an optimal experience for its users," they added.

Aside from zoning the space into communal and private areas, the large oak unit also contains a foldable bed, book shelves, closets and kitchen utilities.

A gap between the top of the cabinet and ceiling is intended to create a more human scale for the lofty rooms and to allow light to filter into the heart of the apartment.

"The design recovers and uplifts both the original Modernist mosaics and the high ceilings with gypsum mouldings," said the architects. 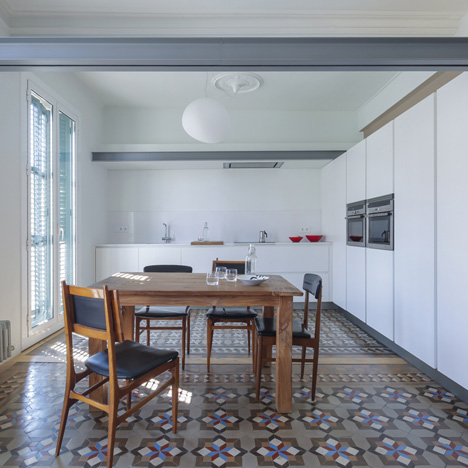 "The project frames all recovered mosaic with a natural oak tree parquet which resemble colourful carpets mounted on the pavement."

"The central furniture element, built with the same natural oak tree, rises from those frames as a great sculpture that contracts and fractures itself in order to fly over the mosaic and to achieve precise alignments with the parquet," they added.

The cabinet is topped by a black metal plate that fully encloses the bathroom, which wraps one side of an internal courtyard.