This one-bedroom apartment in Barcelona has been remodelled by Nook Architects to include a second bedroom, as well as built-in storage around three arched doorways (+ slideshow).

Nook Architects worked in collaboration with the architect Gustavo Cela on the project named Flatmate, after the newly acquired second bedroom and the potential flatmates it might host. 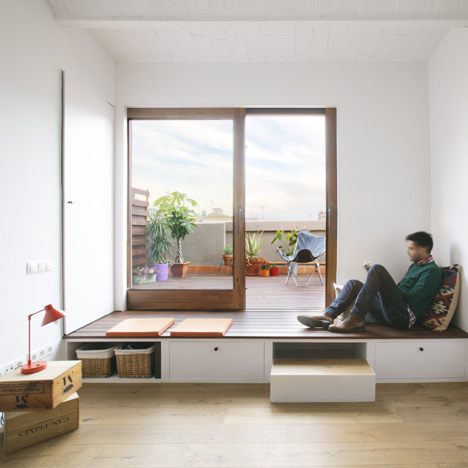 The Barcelona-based architects subdivided a large open-plan living room within the home to form the second bedroom.

"The owner had two main concerns: to add a new bedroom, and to optimise the storage space," said the architects who have previously completed a number of renovation projects in the city.

"This dwelling had to allow the possibility of sharing the flat, hosting guests or accommodating a young family."

The architects integrated storage into the walls of the property to cater for the increased need for space a second bedroom might create.

Storage units are concealed behind panels of wood cladding, wrapped around the base of three arched doorways that lead off the living room to the master bedroom, and to terraces on either side.

A set of double sliding doors inserted in the middle arch separates the master bedroom from the living space. A section of wood panelling runs across the doors, visually connecting them with the walls.

One half of the double door is opaque, hiding the bed from view, while the other half has a pane of ribbed glass that allows light to filter through the bedroom window to the living room.

"This double set of doors increase the possibilities of regulating natural lighting and privacy in both the bedroom and living room," said the team.

In the open-plan living room, a white kitchen island is built around the corner of the new bedroom.

At the edge of the island the flooring transitions from wooden floorboards to hexagonal tiling to define the kitchen from the rest of the space. A combination of white and coloured tiles have been arranged in an irregular pattern.

"This change of material responds not only to functionality, but to the desire to recognise the city's past and to reject the anonymous character of the attics that hide from view from the street," said the architects.

The hexagonal tiling extends along a corridor to the entrance, and into a compact bathroom with minimal white fittings.

The entrance to the apartment has been relocated a few centimetres along the wall to accommodate new storage units for coats and kitchen utensils. The oven and other kitchen appliances are set into the walls, flush to the white cupboard doors.

The white panelled storage wall matches the kitchen island and a sideboard that runs along the rear wall.

"Then all the attention goes to the floors, which is full of textures and colours, providing warmth to the space," the architects told Dezeen.

Photography is by Nieve.