Canadian lighting brand Bocci has opened its first satellite headquarters in a previously disused Berlin courthouse, and filled it with room-sized installations.

The Bocci79 space is described by the brand as "a cabinet of curiosities, a place for testing new techniques and technologies and a laboratory of fabrication for future artefacts".

The 44-room building, which was renovated by architects Grüntuch-Ernst, is situated in Kantstrasse in Berlin's Charlottenburg district.

Built in 1897, the structure was used as a courthouse until 1945 when it became a municipal office, although had been empty since 2010. 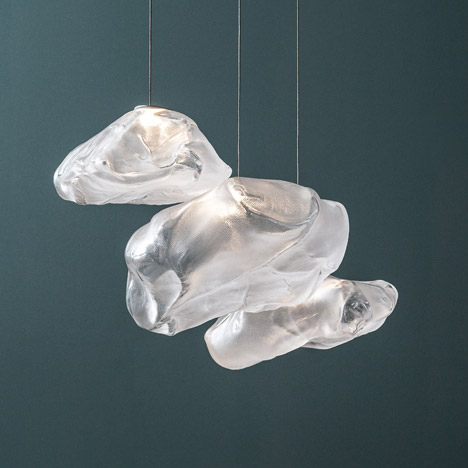 The 2,200-square-metre space is now inhabited with experimental lighting and pieces taken from the 10-year-old design brand's archive. The six-storey atrium is filled with a hanging installation that contains multiple pendant lights, surrounded by silver bundles that resemble coral.

Individual rooms in the building feature different pieces, including a tree-shaped sculpture with circular lighting panels held on the end of branches, and a cloud of globular lights.

Founder Omer Arbel intends for the space to function as an archive, studio, lab and production hub. In addition to displaying prototype and catalogue pieces, he has plans to integrate a porcelain and glass factory in the building.

This will be open to the public, to encourage them to experience and learn about how the materials are processed.

"I am open to explore new ideas and artistic directions through collaborative projects," said Arbel.

Arbel established Bocci in 2005 on the outskirts of Vancouver. The company is best known for its 28 Series pendant light, which it has used to create a variety of installations, including a giant colourful chandelier at London's V&A museum.

The designer hopes opening a second space in Europe will allow him to experiment further with his products.

"I'd like to cross-fertilise my own way of thinking by being interdisciplinary in my approach," added Arbel.

"I have the idea of inviting a scent archaeologists or a very renowned concert pianist, who would turn the space into a single instrument. I look forward to having more culturally driven projects here than in Vancouver."