Only available in an edition of five, the piece has been constructed using 800 pieces of maple wood and 200 brass pivots that allow it to concertina in and out.

The seat is made from sections of wood placed lengthways, while shorter pieces placed at right angles form legs, arms and a slanted back which changes angle as the seat is moved.

The piece can be extended up to seven feet, allowing two or more occupants to sit either at a distance from one another, or very close together when it is fully contracted. 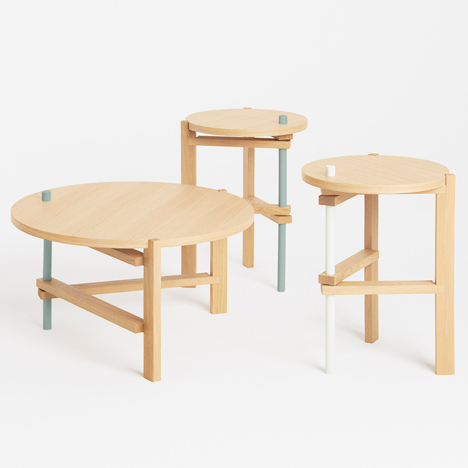 COS, Hay and Tomas Alonso team up to launch folding wooden tables

The idea for the design came from conversation chairs, a style of seat that emerged in France in the 18th and 19th centuries that featured two seats facing in opposite directions. This allowed sitters to converse intimately without touching.

"The tête-à-tête, or conversation chair, is an interesting typology to explore in this way for a few reasons," Stell told Dezeen.

"Typically this rotated symmetrical seating configuration is intended to encourage social interaction, but it does so in a fixed manner."

To create the chair, the designer referred back to the pantograph – a 16th century invention of expanding, hinged parallelograms that was used to copy and scale documents and drawings.

"I have always been fascinated with simple vernacular mechanisms," explained Stell. "There are undoubtedly much older applications of a parallelogram hinge configuration than the pantograph, but this drafting implement eloquently demonstrates the mechanisms function: to accurately transmit and multiply motion."

Stell has already employed the mechanism in tables and stools of various shapes and sizes, but the Austrian Loop chair is his first design that has a diagonal plane as a backrest.

"The movement in this piece serves a practical purpose, but the kinetic means by which it assumes different forms I see as akin to choreography or musical composition," said the designer. "For me, this is at least half of the incentive to explore this vein."

The chair was assembled in Stell's studio in Red Hook, New York, using a process that brings together beading, basket-weaving and bridge-building techniques in miniature.

Other folding furniture covered by Dezeen includes tables created by COS, Hay and Tomas Alonso, and a stool by RCA graduate Jack Smith that collapses when the seat is lifted.