Design Miami 2015: traditional automotive brands "don't need to be scared" of upstarts including Tesla and Apple – and the cars of the future may not be electric, according to Audi's head of experiential marketing.

Other power sources including fuel cells may turn out to be more effective than batteries, Bernhard Neumann told Dezeen, although he said "the end of the combustion engine will come for sure."

When asked whether brands like Audi felt threatened by the hype around battery-powered electric vehicles being developed by American companies, Neumann said: "I don't think we need to be scared. We are very aware and we are adapting very fast."

Californian company Tesla has led the charge towards electric cars, launching the Tesla Roadster in 2008, and Apple is widely expected to follow suit.

Mainstream rivals have since raced to catch up and develop battery-powered vehicles. BMW launched its first electric car, the i3, in 2013 while Porsche unveiled its first all-electric sports car in September.

But while petrol is on its way out as a fuel source, its replacement is not yet certain, Neumann added. "That is the million-dollar question. Everybody is thinking now that it is electric, but I also see alternatives. For example the fuel cell."

This will be the German car brand's first all-electric car when it goes on sale in 2018. Yet Audi is hedging its bets, and will also next year showcase a version powered by fuel cells, which convert energy from fuels such as hydrogen into electricity via a chemical reaction rather than combustion.

Audi is also joining Tesla, Google, Apple and others by developing concepts for driverless cars, adapting its RS 7 performance cars to travel at speed around race tracks without a driver.

Sven Schuwirth, vice president of brand strategy and digital business at the brand, told Dezeen last month that autonomous vehicles could "disrupt the entire business of domestic flights" as business travellers sleep in their cars rather than fly.

This year Audi was celebrating its 10th year as a sponsor of Design Miami, this time teaming up with Swedish design collective Humans Since 1982, who created an installation of four monumental arc lights to highlight the E-tron Quattro.

Neumann, who looks after Audi's presence at car shows and exhibitions as well as cultural sponsorships, has steered Audi's association with the design world over the past decade.

Customers engage more with the way car looks than with its performance, he said, which is usually a secondary consideration once the buyer has been seduced by the aesthetics. " If you dislike a car from the way it looks, you do not even consider buying it," he said.

Neumann has worked with many leading designers to interpret the Audi brand at design events, commissioning Kram/Weisshaar to create the Outrace installation in Trafalgar Square in London in 2010, and hiring Konstantin Grcic to build a pavilion made of Audi TT parts at Design Miami in Basel in 2014.

However he would never let industrial designers loose on the cars themselves, he said. "Not the cars, not the cars. The cars are something we are going to provide. We have to be very careful".

Instead, car design should be left to car designers, he said, who are naturally conservative due to the safety, production and performance constraints they have to work within.

"When Mercedes decided to work with Armani, I didn't like it at all," he said, revealing that musician Pharrell Williams approached Audi last year about collaborating on a vehicle, but was turned down. 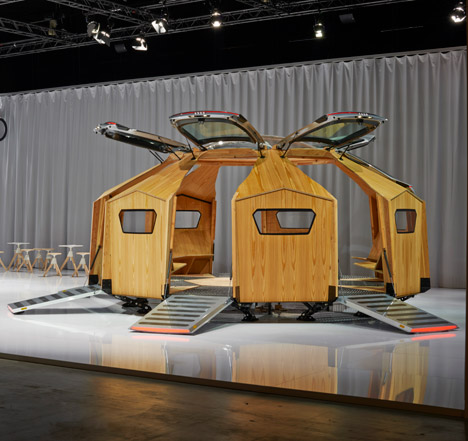 "Pharrell Williams asked: 'Can I do something with your car?' And honestly if I wanted to keep my job, I had to say no."

The E-tron Quattro is one of the first vehicles completely designed by Marc Lichte, Audi's new head of design. Lichte has introduced changes including more muscular wheel arches to reinforce the four-wheel-drive nature of the Quattro range, and a new grille shape that moves away from the horizontal "singleframe" air intake that has characterised Audis since the early 2000s.

"It was much smaller and higher, and now you see what he did, he completely stretched it in the horizontal way," Neumann explained.