Officials in Massachusetts have announced plans for a pair of new museums designed by New York studio Gluckman Tang in the state's northwestern region (+ slideshow).

One museum will be dedicated to contemporary art while the other will show both architecture and "extreme model railroads." Both will be located in the town of North Adams, also the home of the Massachusetts Museum of Contemporary Art (Mass MOCA).

The new 160,000-square-foot (14,864 square metres) Global Contemporary Art Museum is designed by Gluckman Tang for the grounds of the decommissioned Harriman-West airport, and will house the private holdings of several undisclosed art collectors. These patrons are also funding the construction of the museum.

It will comprise a simple warehouse-like building illuminated from above by massive sawtooth skylights.

The second institution, the 32,400-square-foot (3010 square metres) Extreme Model Railroad and Contemporary Architecture Museum, will be housed in a historic train depot that Gluckman Tang will extend.

It will contain a large collection of "O-scale" model locomotives set in a landscape of miniature contemporary architecture by Frank Gehry, Zaha Hadid, and Gluckman Tang, among others.

"This will be our first extreme railroad museum, and we look forward to creating a space that will bring together train buffs and architecture enthusiasts alike," said Richard Gluckman, founder of Gluckman Tang.

The O-scale trains are 1/48th the size of actual trains in the US. Their low-slung extension will create a new entrance to the brick train depot building. 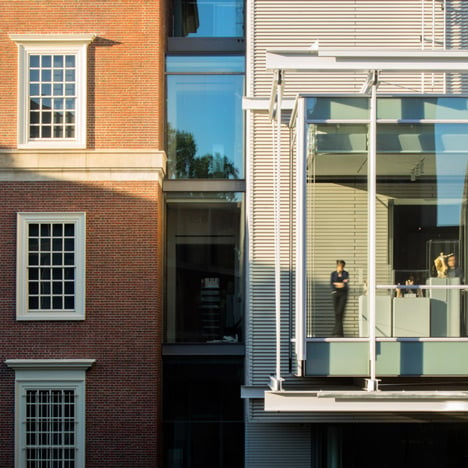 Both institutions are being developed by Thomas Krens, the former director of the Solomon R Guggenheim Foundation in New York.

Krens is closely associated with the expansion of the Guggenheim into a global institution with branches around the world, perhaps most famously with Frank Gehry's Guggenheim Bilbao and the so-called "Bilbao Effect."

In addition to working with Gehry, he also gave Gehry and Hadid major retrospectives while at the Guggenheim.

Former Massachusetts governors Michael Dukakis and William Weld are backing the projects, which they hope will create an economic boom in the region.

"Building a model train and contemporary architecture museum, of this quality and detail, in North Adams, will celebrate this history and build upon the investments in culture and education we made here in the 1980s," he added, referring to the creation of Mass MOCA.

Northwestern Massachusetts is also home the Clark Art Institute, which was recently expanded with an addition by Tadao Ando.