Amsterdam studio NL Architects has completed a waiting area for a station in the Dutch town of Barneveld, featuring glass walls and a large cantilevered roof (+ slideshow).

Barneveld Centrum station is one of 20 stations identified by Dutch rail operator ProRail as sites in need of upgrading to improve the waiting experience for passengers.

It is situated close to the centre of the town, on a line that connects Barneveld with the nearby city of Amersfoort.

NL Architects was asked to oversee the transformation of Barneveld Centrum, having already redesigned Barneveld Noord in 2013.

The existing structure had some positive features, including a clock tower and snack bar, but was in need of several key alterations to make it more attractive and functional.

The original waiting room was contained in the small station building but is now separate, allowing space within the station for new amenities including an enlarged, wheelchair-accessible toilet.

"To make room for the improvements in the existing building the waiting room has been transplanted and placed in a transparent new pavilion next door," said NL Architects in a project statement.

"Since the existing station has such appealing generous features the idea was to 'sample' it; to stretch it to make more of it."

Stretching the station building in a straight line to incorporate the new waiting area was not possible because of the position of some essential services including switch boxes and a power mast, which would have been expensive to relocate. 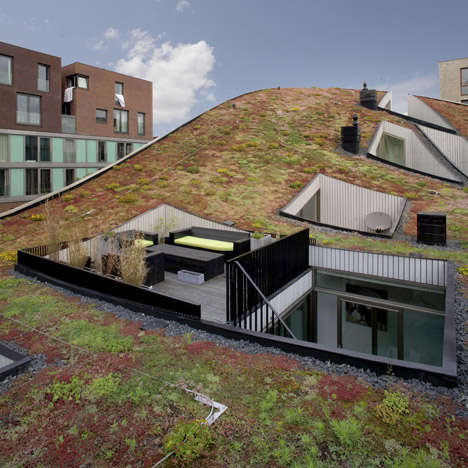 The waiting area was therefore offset from the end of the station, creating an independent structure that is accessible from all sides and offers views in every direction.

"The new building could not be placed in alignment with the existing so it had to be 'de-railed'," the project team added.

"As a consequence, the pavilion became freestanding, with a pleasant side effect being a larger degree of perceptibility. The waiting room shows itself and offers clear sight over the surroundings."

A long roof that touches the station at one corner complements the horizontal massing of the existing structure and stretches out along the platform.

The 23-metre steel beams that support the roof are fixed to four slender columns containing drain pipes and electrical cables for the integrated lighting and tannoy systems.

The four walls enclosing a waiting area at the centre of the pavilion are made from glass. Doors incorporated into each surface allow passengers to enter or exit from any side.

Benches in the centre of the waiting room are sheltered from the elements by the glazing, while skylights in the roof help to minimise the difference in light intensity between inside and outside.

Earlier this year, NL Architects proposed a fanciful hotel for a site in China, featuring a concave inner surface modelled on the form of amethyst crystals.

Other completed projects include a housing block with a plant-covered undulating roof, and a sports centre with angular windows that frame views of the climbing walls inside.