Purple amethyst crystals formed inside rocks provided the inspiration for this ambitious hotel design, proposed by Dutch studio NL Architects for an island off the south coast of China (+ slideshow).

Described by NL Architects as a "slightly insane project", the Amethyst Hotel is conceived as the first in a chain of gem-inspired hotels where guest rooms are housed behind the faceted glass that makes up its fantasy crystals. 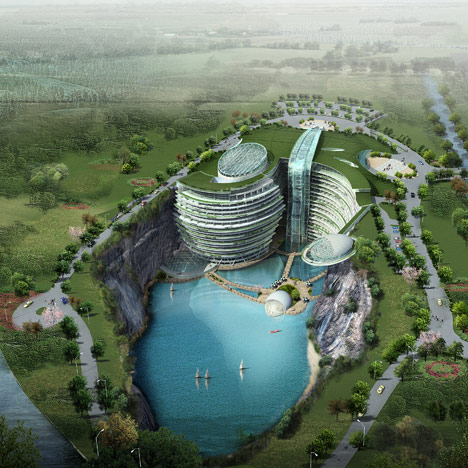 The violet-coloured quartz stone has been the subject of numerous myths through history – in Greece it was believed to prevent drunkenness, while medieval soldiers used it for protection during battle, and others thought it could strengthen the immune system or prevent nightmares.

Architects Kamiel Klaasse and Pieter Bannenberg believe a design modelled on the "seductive gemstone" will benefit from the associations with these alleged "healing powers".

"The Amethyst Hotel has the potential to become a performative symbol – a symbol with actual powers associated with it," they said.

The proposal takes its cues from the portfolio of developer and architect John Portman, who is credited for the widespread popularity of hotels with grand atriums across Asia and the United States, for brands including Hyatt and Marriott.

"The project could be understood as a mutation of Portman's innovative hotel typology of hotel rooms lining a sensational void," said the architects.

"Amethyst Hotel is, in a way, a Marriott Marquis hotel sliced in the centre, exposing its magnificent interior," they added.

Rooms in the hotel would be arranged around the atrium, with access corridors running around the outer perimeter. This would allow every room to face into the central void, which itself would be fronted by glazing.

The first hotel is proposed for a manmade island known as Ocean Flower, which is under development in the sea north of Hainan, southern China. The vision is to eventually build more around the world, each with slightly different shapes.

"Developments are slow. By going public we hope to catalyse the project," the architects told Dezeen.