British product designer Lindsey Lang has borrowed motifs from the history of London's transport network to create a collection of wall and floor tiles with embossed patterns (+ slideshow).

Lang referred to Transport for London's archives to develop patterns for her tiles based on two designs created for the London Underground rail system in the 1930s. She chose to make them from cement to reflect the materials used in tube stations around the city.

The designer's Chevron tile is based on a pattern created by British painter Enid Marx in 1938, which was originally composed of a green and red grid of squares that formed an overall zigzag shape. The design appeared on fabric used for seats across Piccadilly and Central line tube trains. 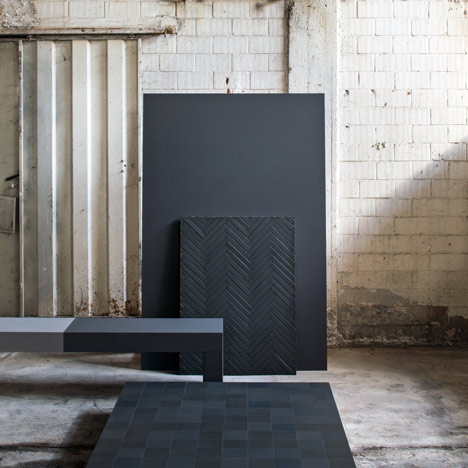 Lang's own Chevron tiles feature raised square, striped and rectangular sections that can be combined together to create diamond-shaped outlines.

The Roundel tiles are based on three-dimensional ceramic panels designed by artist Harold Stabler in 1938 and used in tube stations including Aldgate East and Bethnal Green. The design is based on the Underground's bar-and-circle-shaped logo, first introduced in 1908.

Lang has repeated the elements of the roundel, with tiles that feature a single curved section intended to resemble a quarter of the logo, and a second design that features circles combined with a central cross-shaped raised section.

Lang developed a version of an encaustic tile-making process to create the collection. Encaustic tiles are usually flat designs made from inlaying different colours of clay, but Lang's tiles were made by building up layers of cement by hand to create a 3D pattern, and then pressing pigment into the surface. 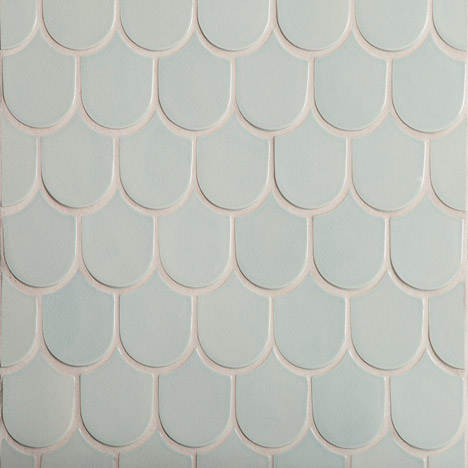 "This was a brilliant opportunity to push the capabilities of our ancient tile manufacturing process," said the designer, who set up her own studio in 2012 after working as an illustrator and graphic designer.

"I worked hard to develop new methods to create a tile that is beautifully three-dimensional," she added. "I feel that it resonates incredibly well with Transport for London."

Encuastic tiles have recently been enjoying a revival in Barcelona, where they are either added to update homes, as in this apartment renovation by Adrian Elizalde, or uncovered and restored, as in this Bach Arquitectes refurbishment.

Lang is not the only designer to have found inspiration around London for a tile collection. British designer Tom Dixon referenced some of the distinctive sights of the city for a collection of tiles based on architectural features found across the city, and transformed into simplified graphic patterns.

Design duo Edward Barber and Jay Osgerby also based a range of tiles on London patterns and colours, including aged bricks and wooden floors.