The tilted frame of the house by Budi Pradono Architects was designed as an antithesis to the status homes and mock-European styling of a gated community in Jakarta, Indonesia (+ slideshow).

The 320-square-metre house called Rumah Miring, or Slanted House, sits on an eight- by 20-metre plot in Pondok Indah, a gated community established in the south of the city in the 1970s and 1980s.

The wealthy neighbourhood is home to famous numerous musicians, politicians and celebrities.

The Indonesian firm wanted to create an "extreme antithesis" to the decorative columns and mediterranean detailing that feature in these existing homes.

When plans for the leaning house were first revealed in 2011, the architects described the project as a "symbol of anti-establishment".

The white steel frame of the house tilts towards the street. Rising above the roofline of neighbouring properties, its skewed angle is intended as a critique of its environment.

"Some of the most successful parliament member in Jakarta, as well as some celebrities who come from other regions, feel like it is a must to have a house in this area," said studio founder Budi Pradono. 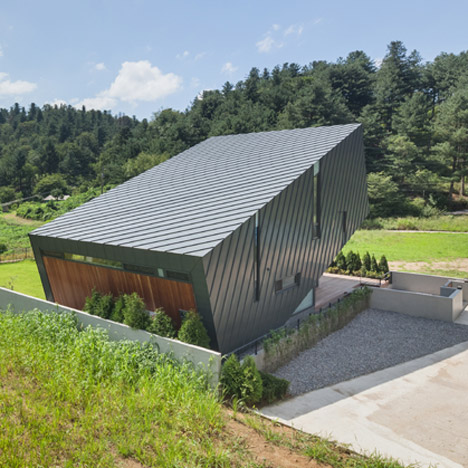 "These symbols of success are generally shown by architecture language," he added. "For instance, some structural columns that are similar to those in Italy or France. These pillars show success."

While the frame is tilted as a symbol of instability, the floors within are level and sheathed in glass to give views across the adjacent river and out of the community.

The panes of glass, which are angled in line with the structure, reveal an indoor swimming pool and abundant planting.

A glass box containing a study is hoisted over the long swimming pool, which occupies a mezzanine level above the driveway. A large master bedroom and large bathroom sit on the first floor, while the uppermost floor is used as a lounge and guest suite.

"The 16-square-metre bathroom area acts as a response to the current trend of urban lifestyle who normally spend more time in a bathroom," explained Pradono, "where users are able to have more quiet time, a contemplative room as well as a resting place while using smartphones, reading newspaper or social media as a communication device."

Private areas of the house are set behind more public areas at the back of the house to provide a degree of privacy from the glazing.

White mesh stairs with opaque treads connect the three floors, each of which has access to a decked terrace where a tall tree grows through circular openings.