Dutch firm van Dongen-Koschuch has converted an old maritime building in the Netherlands into a theatre with a glass auditorium (+ slideshow).

The Amsterdam studio set up by Frits van Dongen and Patrick Koschuch designed the theatre as part of a wider regeneration of Willemsoord, a former naval yard in the Dutch city of Den Helder.

The brick buildings in the docklands were bomb-damaged during the second world war and lay unused for over 170 years before being converted. The new Theatre De Kampanje stands among a group of buildings, which now contains a concert hall, smaller performance spaces, an art centre, offices and a restaurant.

The old brickwork has been repaired, and inside the theatre's auditorium is bracketed by tall glass walls – a feature that is intended to preserve the spatial experience of the historic building.

Glass is often used in converted historic buildings to differentiate between old and new. A similar technique was employed when a glazed house-shaped gallery was inserted into an English stone barn, and to create partitions between original wooden trusses at a barn in rural Germany.

"Inspiration for the design is drawn from the identity and character of the historic buildings, an interplay of structure, craft, public space, docks and water," said van Dongen and Koschuch. 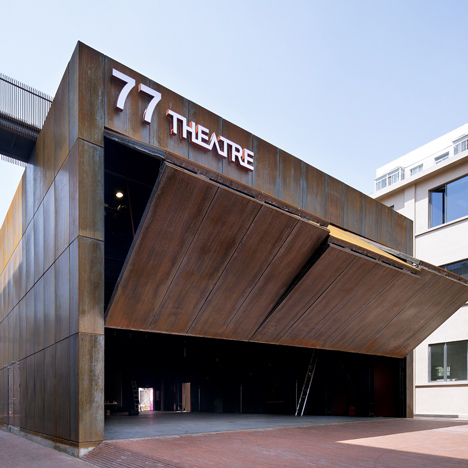 "In order to maintain the unique character of the interior and exterior spaces, the design is restrained, with careful consideration undertaken for any changes made," they added.

The glass walls allow sightlines across the hall and into the adjacent corridors, which are used in the intervals. Wooden shutters can be drawn around the theatre's glass walls to prevent distraction during performances.

Strip lighting in the metal ceiling beams illuminates the bar area, which is furnished with bar stools and sofas upholstered in textiles with muted tones.

"Conviviality is part of the traditions of the theatre, with the social aspect often just as important as the performance itself," said the architecture.

The main entrance to the theatre is set in the centre of the site, while a second door faces the city. This arrangement is intended to encourage a new route through the building to the site's other facilities.

"The plan has also an important urban component, which will give fresh impulse to a forgotten edge of the city," said the duo.

"By situating the main entrance toward the centre of the site while adding secondary access to the city at the side, a lively public path is created along which various elements of the programme are organised, restoring the connection between the city and sea."