New York-based HCWD Studio has released a white-concrete version of its cordless brick-shaped lamp, which is activated by movement rather than a switch (+ movie).

"The objective is to capture the moment of light – being concealed and revealed," said HCWD, which produces art, furniture and architectural designs.

"This unique lighting design would turn a quotidian routine into an enriching experience, providing an unexpected, fun quality to a daily object."

The portable lamp is powered by a built-in lithium-ion battery, which lasts for five hours before needing to be recharged.

The battery is powered up via a USB port and detachable cord. "It can be easily hooked up to almost any power source," the designer said. 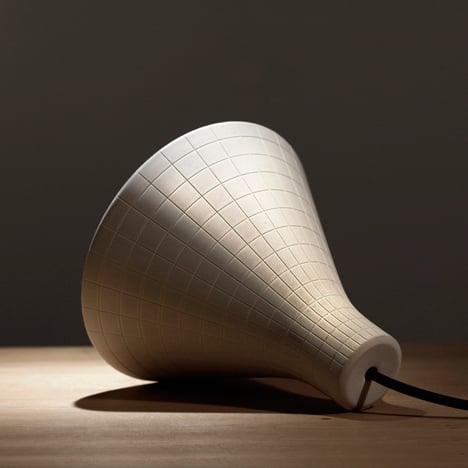 It has been available in aluminium, solid wood, and dark and light grey concrete. The studio has just released a version in white concrete due to customer requests.

White concrete is created by combining materials with lower iron, chromium and manganese levels than those used to make traditional concrete. It has recently become popular with architects thanks to its pure, uniform appearance.

"The concrete version Brick Lamp is made from a special mix of cement and fine grain sands," said the designer. "The concrete housing is cast in a high-quality rubber mould to create a super fine and smooth finish."

The metal version is made from a block of aluminium and is cut using a CNC (computer numeric controlled) machine.

"To give it a sleek metallic touch, we use sand-blasted matte finish on the bevels and brush texture on the top surface," said the designer. "The finished product then goes through an electric anodised process to permanently seal and protect the aluminium from rust and stain."