Sapper died on 31 December 2015 according to a statement released by publishers Phaidon, which is due to release a monograph presenting work from the designer's almost 60-year career.

Sapper designed products including the Tizio desk lamp for Artemide, the ThinkPad range of laptops for computer company IBM and the 9091 whistling kettle for Alessi. Other clients included Kartell, Knoll, Lenovo and Magis.

Deyan Sudjic, director of London's Design Museum, praised Sapper for "his quiet wit, his humanity, and his acutely developed eye for detail".

"He showed that a designer does not need a signature style to be immediately recognisable for his intelligence," Sudjic added. 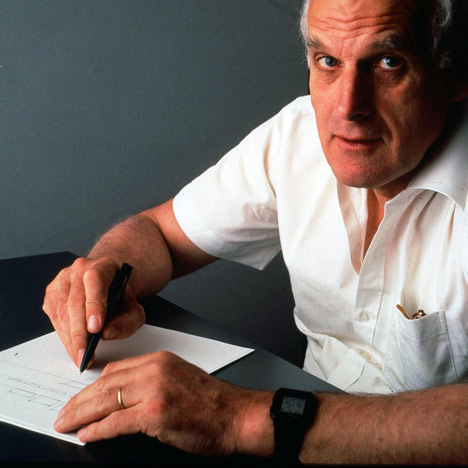 "Steve Jobs once wanted to hire me" - Richard Sapper

Many of Sapper's products are part of the permanent collections of the world's most prominent design museums, including the Museum of Modern Art (MoMA) in New York and the V&A museum in London.

"Richard Sapper was an extraordinary designer of rare power," said Kieran Long, head of architecture and design at the V&A. "It might sound like a cliché, but his work was a synthesis of German and Italian design of the late 20th century."

He was born in Munich in 1932 and was first employed as a stylist with Daimler Benz in Stuttgart. After relocating to Milan in 1958, Sapper initially joined the offices of architect Gio Ponti and subsequently the design department of La Rinascente. He also founded his own studio in Milan in 1959 and worked as a consultant for many of Italy's leading companies, including Brionvega, Fiat and Pirelli.

"Sapper was a gifted designer whose work could be seen as both rational, and emotional, reflecting the Germany of his birth, and the Italy that he moved to at the height of its miraculous post-war rebirth as a global centre for design," said Sudjic.

Sapper's most notable collaboration was with Italian architect and designer Marco Zanuso, with whom he worked on and off for 18 years until 1977.

The pair were consultants for Italian electronics company Brionvega, where they designed a series of radios and televisions.

"Both at the time of his collaboration with Marco Zanuso and during his solo career, he has left an impression not only on the history of design, but also on people's lives – the mark of a really important designer," said MoMA senior curator of architecture and design, Paola Antonelli.

Sapper's research into the development of new urban transportation systems with another Italian architect, Gae Aulenti, culminated with the lightweight, foldable Zoombike – launched in 2000 but no longer in production.

Long said that Sapper combined "the elegant minimalism and problem-solving of Dieter Rams or Jonathan Ive with the humour and craft of the Milanese designers he knew so well and worked with for years".

"He designed for mass production, but also pushed boundaries with his experimental projects in transportation," he added.

In 2013, Sapper launched a website chronicling his work dating back to the 1950s. During an interview looking back on his career, Sapper told Dezeen how Steve Jobs once tried to lure him to work for Apple, "but the circumstances weren't right because I didn't want to move to California and I had very interesting work here that I didn't want to abandon."

When asked if he regretted turning Jobs down he said: "Sure I regret it – the man who then did it [Jonathan Ive] makes $30 million a year!"

Sapper taught and lectured at institutions including Yale University, the Kunstakademie Stuttgart, the University of Beijing, the Royal College of Art in London, the Domus Academy in Milan and the Hochschule fuer Angewandte Kunst in Vienna.

In 2012 Sapper received the Merit Cross of the Order of Merit from the President of the Federal Republic of Germany.

"Sapper leaves a huge legacy, one we should all look at afresh as we look for new design approaches to technological products," said Long. "The ThinkPad is the first great piece of design of the computer era – he was way ahead of Apple then."

"He was a great, fun, warm person – besides a monumentally good designer," said Antonelli.