A curved wooden staircase connects the two floors of this penthouse apartment in Brussels, which architecture office B-ILD converted from two flats (+ slideshow).

The Belgian studio altered the plans of two adjacent single-level properties overlooking Flagey Square, transforming them into a single home complete with a workspace for an attorney's office.

"The two floors were supposed to be sold as two separate apartments," explained architect Bruno Despierre, whose previous projects include a wartime bunker converted into an austere holiday home.

"But we proposed to alter the typical plan layout and to transform the two spaces into one fluid working and living space of 270 square metres," he told Dezeen. 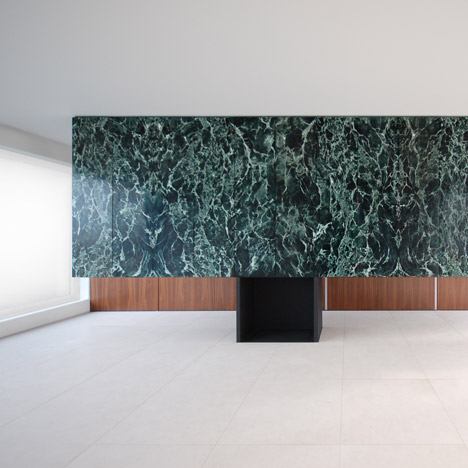 Both levels of House Flagey are fronted by floor-to-ceiling windows, offering views out over the square.

"We used the existing open space to create a pivotal centre for each floor," said the architect. On one side the space opens and surrenders itself to the surrounding vista. The direction of the views determined the design of this open space."

The floors are connected by a curving staircase. The surrounding wall is lined with a veneer of meranti wood, offering a warm contrast to the lighter colour palette in the open-plan living rooms.

Communal work areas are located behind the glazed facade, while more private area are contained in the back of the property behind frosted glass panels and white-painted doors. A small library is visible through an aperture in the living room wall.

"The back of the apartment functions as a backdrop for an enclosed shell which contains the functional program," said Despierre.

"Functions for storage are integrated in this backdrop. Private functions are hidden behind it. They surround the open space, leaving nothing else to focus on but the attraction of the view."

Most walls in the property are covered in panels with a chalk and cement finish, but the team also added colourful tiles to both the upstairs bathroom and a passage leading through to an outdoor terrace.

"The rooms are demarcated by the application of their own specific materials, with wooden veneer for the staircases and built-in cabinets, green marble for the passageway to the terrace and deep blue mosaic tiles for the bathroom," said Despierre.

"The apertures between the open space and the adjoining rooms are framed by subtle black steel framework, accentuating the different shades and functionality of this adjacent space," he added.