US design collaborative Collective-LOK has won this year's competition to create a public installation for New York's Times Square in celebration of Valentine's Day.

"A faceted ring of nine golden, mirrored hearts will create an alternative pavilion that reflects and multiplies the pulsating activity of Times Square, creating a kaleidoscopic interior that dissolves the boundaries between viewing and performing," said the competition organisers.

"Within the ring, diamond-shaped spaces inside each heart will create 'kissing booths' where couples will find their activities mirrored, allowing both privacy and publicity," they added.

The installation will be unveiled on 9 February 2016 and will remain on view until 6 March 2016 at Father Duffy Square, between 46th and 47th Streets.

"We are thrilled to create the Heart of Hearts for Valentine's Day, an engagement ring for our love affair with the spectacle of Times Square," said Collective–LOK, which was formed by architects from New York and Boston.

"It's truly a special opportunity to provide a space for intimacy and performance in the heart of the city, one we hope visitors will love." 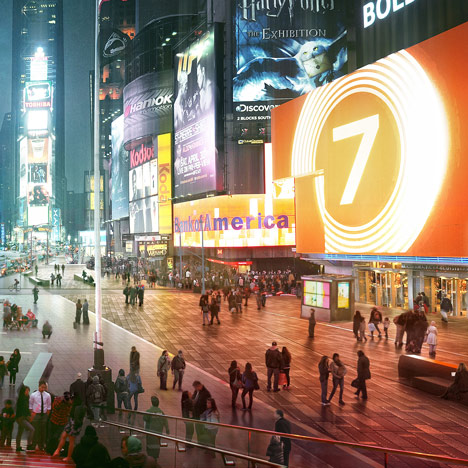 The competition is hosted by the nonprofit organisation Times Square Alliance as part of its Times Square Arts programme. The entries are curated by the New York Center for Architecture.

Past installations have included a transparent cube surrounding a glowing red heart, designed by Bjarke Ingels Group in 2012, and a heart-shaped platform made of salvaged wood from Hurricane Sandy, designed by Situ Studio in 2013.

"The cacophony of Times Square is a tough place to celebrate the tender passion of Saint Valentine," said David Burney, interim executive director of the Center for Architecture.

"But Collective–LOK has pulled it off with nine mirrored golden hearts that create a kaleidoscopic reflection of all who walk through them. It is both a stage and an enclosure – a room-within-the-room of Times Square that will invite participatory celebration of Valentine's anniversary."

For eight years, the Times Square Alliance has hosted the competition, which invites architecture and design firms to submit proposals for a "romantic public art installation" for Times Square in honour of Valentine's Day on 14 February.

Collective–LOK includes Jon Lott, founding principal at the New York studio PARA-Project; William O'Brien Jr, a principal at the firm WOJR: Organization for Architecture, which is based in Cambridge, Massachusetts; and Michael Kubo, co-director of Boston's Pinkcomma gallery and a collaborator at the interdisciplinary practice Over, Under.