The installation was initially set to be built for the 2020 edition of the city's annual design festival but was pushed back several times due to the coronavirus pandemic.

"Created for Design Pavilion and the NYCxDesign Festival, Filter carves out space for quiet recentering within the frenetic energy of Times Square," said CLB Architects, a studio with offices in Jackson, Wyoming, and Bozeman, Montana.

"Designed as both a monumental object and an ephemeral experience, the pavilion establishes a new node in the heart of New York City’s urban fabric – reorienting that experience toward the natural, rather than the man-made," the studio added.

Two wooden ramps at opposite ends of the circular structure lead up to openings in the steel enclosure. The walls of the pavilion are made of large, folded steel plates that were cut to allow visibility through the structure.

"Fluid shards of naturally weathered steel invite close inspection, and a gentle ramp leads around the perimeter, offering views of the space held within," said the architects.

A tree occupies the centre of the structure, marking a contrast with the urban context of Times Square. Around the perimeter of the space, V-shaped benches nest into the steel panels, offering visitors a place to briefly sit.

The installation was financially supported by Emit, an industrial manufacturing company based in Sheridan, Wyoming that also participated in manufacturing the steel components used for the pavilion.

After NYCxDesign, the installation will be disassembled and returned to Wyoming to be installed outside the company's offices, while the tree will be donated to the New York City non-profit The Battery Conservancy.

"When it completes its cycle and reaches its final resting point in Sheridan, FILTER’s patina will reflect the accumulations of both dry western air and East Coast salinity," said the architects. 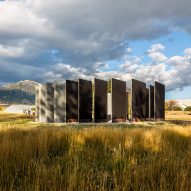 It was installed this week and will open to the public from May 7 through May 15.

NYCxDesign is an annual festival that is celebrating its tenth edition. The festival will run from May 10 to May 20 and showcase the best of New York City's design and architecture scene in a series of virtual and in-person events across the city.

CLB Architects has recently completed another public art installation in the American West, using glue-laminated timber panels to create a gathering space for the town of Bozeman.

Other public art installations around the USA include a range of sculptures by Wevolve Labs in Austin that are inspired by local plants and birds and an oversized playground designed by Architensions for Coachella.

More projects that use weathering steel