PKMN Architectures has renovated an apartment on the Spanish coast, adding modular storage walls that spin around to create extra bedrooms for guests (+ movie).

The Madrid-based studio designed the home for Maria Jose and Enrique – a couple who live in Mexico but who frequently travel to Europe.

The pair wanted a second home in Asturias, northwest Spain, which could adapt to accommodate their whole family when they visit.

"When Enrique and Maria Jose contacted us to design their apartment they were quite convinced about wanting to work with mobile furniture systems," architect David Pérez told Dezeen. 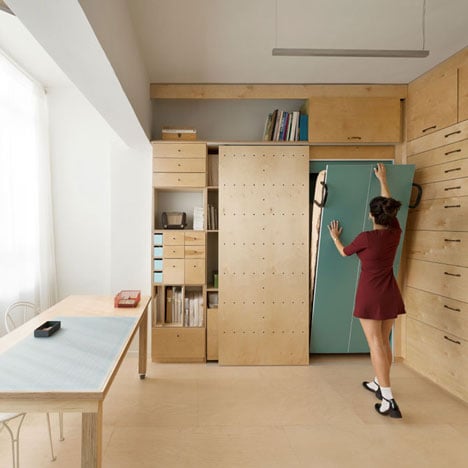 Space-saving modular studio for an artist by Raanan Stern

"They thought that it was the only way to solve the issues they were dealing with in relation to the apartment they'd just bought – a very badly arranged dwelling that didn't fit their needs at all."

"They wanted to have an apartment that could adapt to host a different number of people depending on the time of the year, but they didn't want to have their space divided into a lot of small rooms," he added.

The architects – whose past projects a half-submerged leisure and culture centre – replaced partitioning walls with floor-to-ceiling storage systems that pivot on small wheels.

"The apartment has the views towards the sea that the clients always dreamed of, but the existing partitions in the place didn't allow them to completely enjoy those views," said Pérez.

"The arrangement made with rotating partitions made it possible for them to have a very open space with a great panorama over the sea."

The rotating walls are made up of a light steel skeleton and panels of white coated wood. Along with integrated storage, each partition has a foldable bed attached.

MJE house is part of PKMN Architectures's Little Big Houses scheme, which it began in response to the country's lack of affordable housing, particularly in cities.

As part of the project, the studio also completed an apartment for a designer in Madrid – adding moveable library-style shelving units that that serve various functions.

"The main motivation for us when we initiated the project was to be able to offer a response to the problems that a large amount of people find today – that their home is made according to housing standards that became obsolete a long time ago," Pérez said.

"Most people living in cities can't even afford a home with one bedroom, and our lives change much faster than our houses are able to cope with," he added.

"We think that it should be our houses that adapt to us and to the changes in our lives – not us having to adapt to a space that is not capable to change."