New York-based Diller Scofidio + Renfro has added a sculptural metal volume to a 1930s printing plant to form the new home for the Berkeley Art Museum and Pacific Film Archive in California (+ slideshow).

The cultural institutions, collectively referred to as BAMPFA, are run by the Berkeley branch of the University of California. Their new home will open to the public on 31 January.

BAMPFA was formerly housed in a Brutalist building for more than four decades, which was closed due to seismic concerns. Japanese architect Toyo Ito was originally hired to design a new facility for the institution, but he was ousted in 2008 due to high costs.

The new 83,000-square-foot (7,710 square metres) complex is located in downtown Berkeley, directly across from the school campus. The visual arts centre contains exhibition space, theatres, and an art and film library, among other programmatic elements. 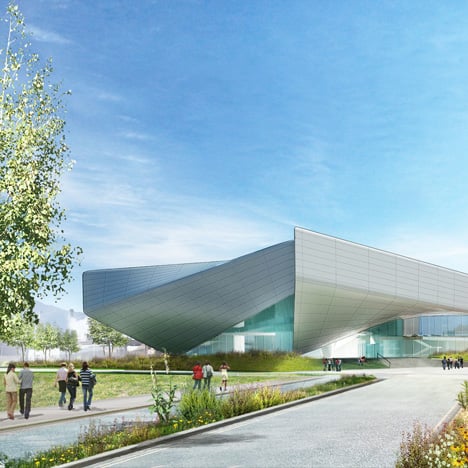 "The new home for BAMPFA leverages its location between downtown Berkeley and the UC campus by providing unprecedented visual and physical access to its programmes for both visitors and casual passersby," said Charles Renfro, partner at Diller Scofidio + Renfro (DS+R).

"BAMPFA will become a new social and cultural hub for the entire region," he added.

DS+R was charged with repurposing a 48,000-square-foot (4,450 square metres) printing plant dating to the 1930s. The former industrial facility consists of a low-slung structure with a sawtooth roof and an adjoining, three-storey rectangular bar.

The firm also designed a sculptural volume for the property that encompasses 35,000 square feet (3,250 square metres) and is cloaked in metal panels.

The metal cladding extends over the area where the two original buildings converge, and forms a small volume that cantilevers over the street. Within this volume is a cafe that offers views of the Golden Gate Bridge and the Berkeley hills.

"The supple body of the new structure, draped between the original 1930s orthogonal buildings and snagged on their sharp corners, creates a dramatic public spine that begins as a cantilevered cafe marking the building's entrance, and culminates in an indoor theatre on the other end of the site," said Renfro.

"The design merges the old and new to create a permeable interface between the institution and the public," he added. 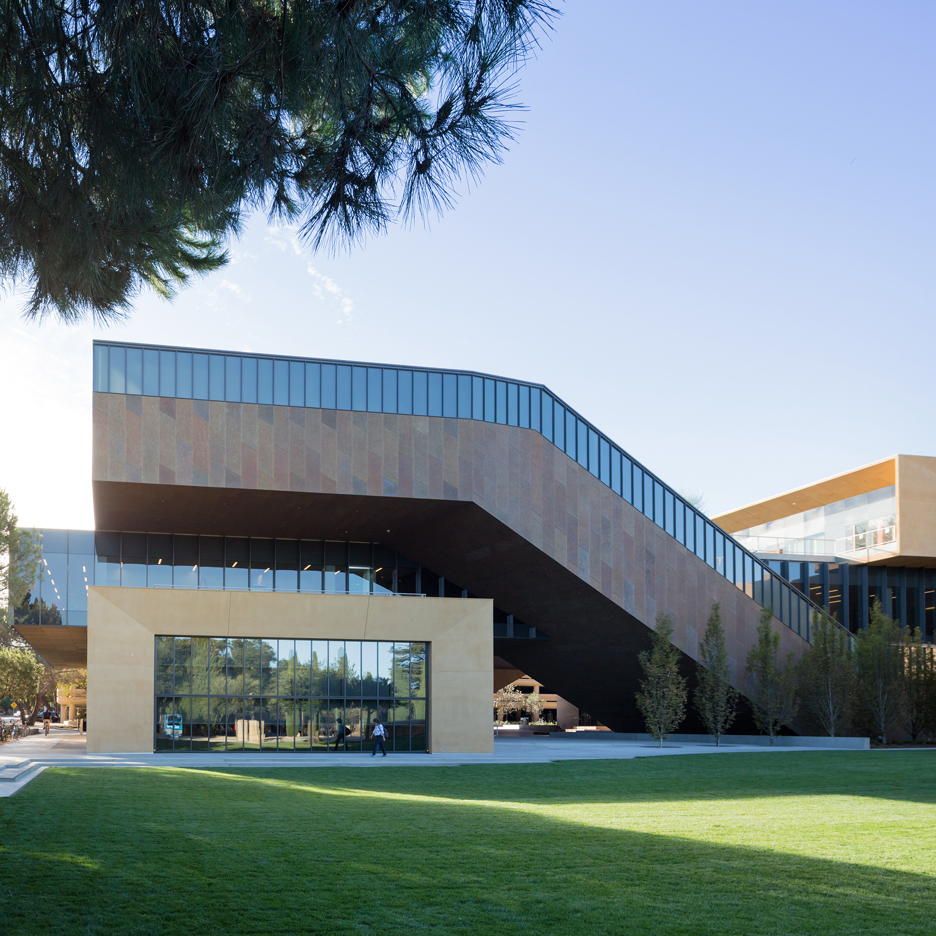 "The sculptural form of the theatre volume reinterprets the 1930s Art Deco style of the press building in a contemporary language of ruled surfaces and precision-formed stainless steel," said Renfro.

Outside, a large LED screen overlooks a plaza used for public film screenings.

BAMPFA's old home, which opened in 1970, was designed by San Francisco architect Mario Ciampi and was deemed seismically unsafe in 1997 – nearly two decades ago.

The university decided it could not be modified without compromising interior galleries, and opted to build a new home for the visual arts centre. It commissioned Toyo Ito to design the project, but abandoned his scheme "because of its high cost", according to BAMPFA.

It later hired  DS+R, which is known for high-profile projects such as the High Line in New York and The Broad museum in LA, which opened last September to much acclaim. The firm was asked to create a "new, more affordable design".

"BAMPFA selected world-renowned interdisciplinary design firm Diller Scofidio + Renfro for the project because of its unique ability to connect institutions to wider urban and public contexts and its proven success in merging adaptive reuse of historic structures with dramatic new design in major urban cultural initiatives," said the cultural institution.

"The new BAMPFA will be the architectural and cultural centerpiece of downtown Berkeley," added Lawrence Rinder, director of the institutions.

The university plans to upgrade the art centre's old home and use it for academic purposes, according to reports.