The 10-storey David Rubenstein Forum in Chicago designed by US studio Diller Scofidio + Renfro has been awarded the 2022 prize for Best Tall Building Worldwide by the Council on Tall Buildings and Urban Habitat.

Completed in 2020, the David Rubenstein Forum at the University of Chicago was named the overall winner at the Council on Tall Buildings and Urban Habitat (CTBUH) awards last week.

Designed by a team led by Diller Scofidio + Renfro project director Sean Gallagher, the distinctive tower is located on the University of Chicago's campus alongside the Midway Plaisance park near the Rockefeller Memorial Chapel.

It consists of six stacked blocks that each cantilever out from a central spine, with a 12-metre cantilever sheltering the building's entrance.

The 9,000-square-metre building contains a 285-seat auditorium along with lecture halls and numerous multipurpose rooms for teaching.

As each of the cantilevered blocks has glazed ends, the majority of these spaces have views north to downtown Chicago and Lake Michigan or south across the university's campus.

The building achieved a sustainability certification of LEED Gold and its large glazed facades include "bird safe technology" to make the glass visible to birds as it is located on the Mississippi Flyway Zone. 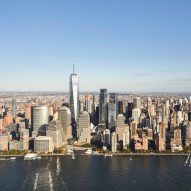 "With the United Nations projecting nearly 70 percent urbanization by 2050, the demand is growing for healthier, more sustainable, and socially just urban environments tall buildings and other smart, resilient approaches to population density are an integral part of the solution," said CTBUH CEO Javier Quintana de Una.

"The projects selected for our yearly Award of Excellence competition represent the most advanced concepts and technologies currently employed around the world, and the David Rubenstein Forum in particular exemplifies the diversity of interdisciplinary ingenuity required to address the complex needs of students, workers, communities and the public in general."

Other projects completed by the studio include the US Olympic and Paralympic Museum in Colorado, the renovation of New York's Museum of Modern Art and the Broad Museum in Los Angeles.

The photography is by Brett Beyer.