London-based Mossessian Architecture has won a competition to design the Makkah Museum, a new building dedicated to the Islamic faith in Mecca, Saudi Arabia (+ movie).

The Makkah Museum will occupy a site seven kilometres from the Grand Mosque, which houses the Kaaba – the most sacred location in the world for Muslims.

The building will include 5,600 square metres of gallery space to host exhibitions related to the international practice and history of Islam and the life of Muhammad.

"The Makkah Museum will offer a unique interpretation and reflection of faith to the millions of Muslims who visit Makkah from around the world and who, up until this point, have had no cultural institution of this kind to enhance their visit to the holiest of Muslim cities," said a statement from Mossessian.

Mossessian teamed up with Paris exhibition architects Studio Adeline Rispal to enter the invited competition for the museum project. The duo were announced as the winners this week.

Rispal designed a central void inside the structure to act as a "virtual minaret" that visitors ascend as they move through the exhibitions.

"Mossessian Architecture has delivered this by devising a continuous ramp system to ascend the void, with a parallel spiral staircase for the descent," explained the firm.

"Both circular (like the celestial sphere) and ascending (symbolising the spiritual journey), the central minaret-shaped void calls upon the Muslim community to transcend earthly concerns through their faith – and pursuing the quest for knowledge onwards into infinity."

Exhibits and panoramic film displays will occupy either side of the ramp travelling up through the space.

At the top, visitors will be able to access a climate-controlled garden space, which is designed to be usable even in the extreme heat of Saudi Arabia's summers.

The underside of the spiralling stairs leading back down will be inscribed with the 99 Names of Allah, the names of god in Islam, which will be viewable from a dedicated gallery space at the bottom. 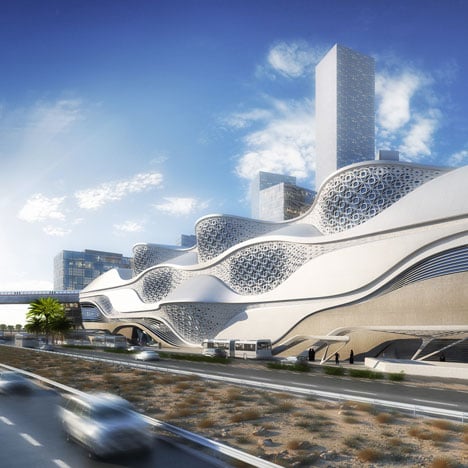 The outside wall of the museum will incorporate stone sourced from every country in the world where Islam is currently practiced. Hujaz rock from the mountains around Mecca will be used for the interior.

"Inside, the rock is used to create alcoves and plinths that visitors encounter as they mount the ramp," said the architect. "These house the exhibition displays, which tell the story of the life of the Prophet and enrich understanding about Islam."

Based in Hoxton, east London, Mossessian Architecture was founded in 2005 by architect Michel Mossessian. The studio has a large number projects currently under way in the Middle East and Africa, including the regeneration of the Place Lalla Yeddouna at the heart of the historic Medina in Fez, Morocco.

The firm's UK projects include mixed use towers in London's Paddington Basin and offices in King's Cross.

Mecca is the holiest city in Islam, and is believed to have been the birthplace of the prophet Muhammad. Non-Mulsims are banned from entering the city. Its central mosque is the focal point of the annual mass hajj pilgrimage.

A number of heritage campaigners have expressed concern about the city's development in recent years, suggesting that historic buildings were being demolished indiscriminately to build accommodation and amenities for the millions of pilgrims who visit Mecca.

The Makkah Royal Clock Tower in Mecca was the second-tallest building in the world until the completion of Gensler's Shanghai Tower earlier this month.

Jeddah is also set to become home to the world's tallest building – the Kingdom Tower currently under construction is expected to have a height of 1,000 metres.

More in the Middle East